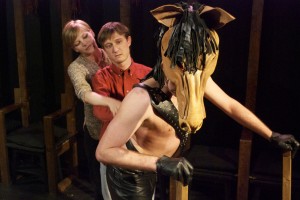 Redtwist Theatre has revived Peter Shaffer’s venerable “Equus,” but this 2010 revival is not to be confused with the company’s 2007 revival. In a full-length program note, Artistic Director Michael Colucci, who directs this “Equus,” goes into great detail about the differences between the two productions—from cast and crew to design changes. What this communicates to me—besides the fact that Colucci really, really, really likes this play—is that he and his collaborators have tremendous belief in what they can bring to it. This is a refreshingly bold artistic statement if ever there was one. But it is one Colucci and his collaborators have earned the right to make, for this “Equus” is a very good production of a very good play. It’s not without its challenges, but overall this is an absorbing, arresting and intelligent staging.

“Equus” tells the tale of a middle-aged psychiatrist’s (Dr. Martin Dysart) search for the reasoning behind a 17-year-old boy’s (Alan Strang) mutilation of six horses with a metal spike to their eyes. Dysart narrates a good bulk of the play directly to the audience, but much of the action is reenacted as flashback, or dramatizes the psychoanalytical sessions between temperate doctor and tempestuous patient. As Dysart probes Alan’s past, an unhappy childhood is fast uncovered, as are clashing parental units: a sexually repressed, voyeuristic and atheist father; a religious fanatic of a mother who may have unconsciously enabled the slow warp of her son’s childhood love of horses from strange obsession to unhealthy messianic devotion. But “Equus” is equally the story of Dysart, a man experiencing a mid-life crisis and who has come to resent his successful career and sexless marriage. If half the play’s driving tension is in its glorious build-up to the motivating incident leading to Alan’s blinding of the horses (I won’t give anything away here, but suffice it to say that as written by Shaffer and staged by Colucci, it’s well worth the two-and-a-half-hour wait), then the other half is psychological and concerns Dysart’s mental struggle between admiration and resentment for Alan, a boy whose deplorable actions represent the victory of passion over restraint, of instinct over reason and, I don’t think it would be a stretch to say, of life over death. Who would you rather be, the bon vivant (Alan) or the fuddy duddy (Dysart)? Quite simply, this is the question “Equus” posits to an audience throughout half its time being a mystery-puzzle play, and the other half appropriating a garrulous psycho-babble dissertation. Never mind Shaffer’s dense monologues or elitist references to everything from Greek mythology to religious iconography, “Equus” boils down to whether you would prefer your life be free and unbridled, or to appear like something on Ritalin.

It’s a specious argument, of course, because you can’t ignore the crime, and in allowing an audience to identify with Alan for much of the play—Dysart is such a repressed and condescending character that it’s virtually impossible to want to identify with him—“Equus” becomes a dramatic piece of sleight-of-hand manipulation. It’s also, ultimately, intellectually dishonest. Who doesn’t, metaphorically speaking, want to throw caution to the wind and run away with the circus, especially if like Dysart one reaches the point in one’s life where maturity, complacency and familiarity have sucked the passion out of certain things in life? Perhaps in 1973, when the play was first performed in England, it was possible to see Alan’s crime—a melodramatic and obvious metaphor if ever there was one—as a stand-in for the unapologetic and subversive actions by certain persecuted or misunderstood minorities (homosexuals, the mentally ill). Today, however, the play could be dangerously read as a condemnation of the psychological treatment of modern-day “passions” problematic to today’s societal norms—pedophilia, bestiality and other types of psychiatric disorders—“obsessions” whose psychiatric suppression is paramount to the end of the “individual.”

Redtwist Theatre’s aggressively intimate space means that the audience can hear and cling to every subversive line in the play. In fact, the performing area is so surprisingly constrictive that many times the performers can do little but stand and deliver their lines, a storefront handicap that works well for a Shaffer play in which language dazzles as brightly as the debatable ideas. As Alan, Andrew Jessop is the dramatic anchor of this production. His boyish good looks, aquiline nose and fair complexion make for a physical tabula rasa against which a complex and deeply layered psychological performance makes all the more of an impression. Jan Ellen Graves, in a supporting role as a Dysart confidante, has a magnificently austere look to her face that adds to the play’s wintry tone. And as a young yet precocious girl who sets her eyes on Alan and sets off a chain of disastrous events, the utterly captivating Holly Bittinger, with her piercing blue eyes, gamine frame and defiantly punkish attitude, reminds me of a young Martha Plimpton. As Dysart, however, Brian Parry disappoints. There’s no denying he speaks the text gorgeously; Parry’s mellifluous vocal instrument has the qualities that dream voiceover careers are made of: ominous and authoritative tones layered with emotional warmth and texture. He sounds fantastic and is the perfect vessel for Shaffer’s dialogue, but there’s something hollow in the characterization, suggesting that Parry hasn’t quite pierced the psychological patina of his character, a performance that delivers vocally (like Shakespeare, Shaffer’s dialogue can be that satisfying purely on an aural level), but lacks verisimilitude.

As a whole, however, Redtwist’s production is a deeply satisfying experience, and reminds one of why this highly debatable and subversive play has lasted for nearly forty years. (Fabrizio O. Almeida)