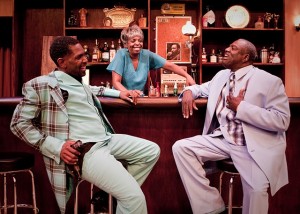 Any new show at the Black Ensemble Theater remains the perfect introduction for anyone who hasn’t experienced this troupe before. Their show template, or formula, or whatever you want to call it, just keeps getting better. Those God-given, up-to-the-rafters vocals still bring down the house, but there’s more control and texture to them. The quality of the sets and costumes look more and more like something you’d see on another big stage in the city. The song selections remain strong and fabulous, but the play list is more varied and allows for more of the singers’ divergent personalities to shine through. And the band! The five-piece band, led by musical director Robert Reddrick, alone is worth the price of admission. There will always be room for improvement in the book department, that thin narrative line on which those musical numbers are sometimes haphazardly hung. Still, you can’t fault BET too much for this, especially when they’re conscious of it themselves and can turn a lack of dramatic motivation into a humorous moment of meta-theatrics. And you have to give credit to an ensemble that will admirably toss political correctness to the side for the sake of an honest line and genuine social observation. In their new show, when one character is at the end of her rope with a nasty landlord and another asks if they can get their “boys” to “take care of things,” her response doesn’t mince words: “Oh, please negro, your boys are probably dead or on Social Security.” This gets one of the biggest laughs of the evening, as it should.

All of this, and more, is evident at Black Ensemble Theater’s new show, “Nothing but the Blues,” which means that you’re actually getting a lot more than just two-dozen great blues numbers. It concerns the late Theresa Needham, who owned and operated one of Chicago’s legendary blues clubs until she was forced to close it down in the mid-to-late 1980s. The story, which tells you little about Theresa herself and only perfunctorily goes into the legal and financial reasons for the premature shuttering of Theresa’s Lounge, takes place in the club (designer Carl Ulaszek is responsible for the flawless environmental set) and sees a clutch of Theresa’s regulars standing up to the mike and delivering their takes on old blues standards. Written by Joe Plummer, and directed by BET stalwart Jackie Taylor (correction, her rousing curtain speeches alone are worth the price of admission) and co-directed by Daryl Brooks, there isn’t a weak musical moment in the show. Delivered by seven confident performers—it really would be immoral to single anyone out—this has to be one of the best ensembles that I have witnessed singing the blues since seeing the complete original line-up to the Fats Waller musical “Ain’t Misbehavin” in the late 1980s. Choreographer Rueben Echoles’ joyous and marvelously inventive steps always remind me of how much Bob Fosse’s movement vocabulary “borrowed” from black dance tropes, and this time around Echoles’ work shares with that of the late Michael Peters the wonderful gift of spontaneity, and the sense that the moves we are watching are being made up on the spot.

Yeah, it’s a formula alright. But at least Black Ensemble Theater knows all too well that if it ain’t broke, don’t fix it. (Fabrizio O. Almeida)