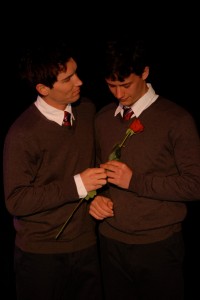 This is not your typical “Romeo and Juliet.” Adapted by Joe Calarco, “Shakespeare’s R & J” reimagines the classic tragedy on the campus of an all-boys’ school. Repressed by the conservative strictures of the school, four students sneak away in the night to read and perform “Romeo and Juliet” for each other, with nothing to augment their growing imaginations but a long red silken scarf. Director Frank Pullen exercises some beautiful and energetic staging, the raucous horseplay of his actors punctuating and commenting on the natural imagery of the original text. Rather than simply being content with potty humor and dick jokes, however, the production’s real poignancy comes out when the boys happen upon accidental revelations about sexuality and maturity, such as in the moment when they begin a scene by “playacting” women through exaggerated falsettos before Student 2 enters as a “real” Juliet. The Journeymen’s production hits such notes that make you realize both the beauty and danger to be found in taking such risks. The actors may opt for humorous choices a few more times than is really necessary, but that’s to be forgiven for a generally articulate reading of the play, and the production’s reflections on sexual identity and masculinity land without overwhelming. (Neal Ryan Shaw)

The Journeymen Theater, at The Coach House Theater at the Berger Park District and Cultural Center, 6205 North Sheridan, (773)761-3294, through August 21.