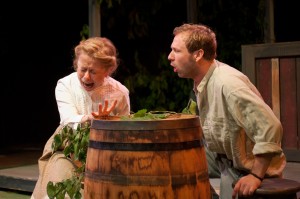 For nearly  400 years, the Irish suffered at the hands of British landowners, suffocated by poverty, ignorance and superstition. But instead of focusing on its weaknesses, playwright Jim Lynch concentrates on the culture’s strengths—its cleverness and humor—to show poor farmers rising above tough times and surviving.

Frank Nall and Bill Boehler’s slapstick is a hoot, Horst and Callan’s confrontation is a fearsome thing to watch. But the gem of the evening is Finbar’s come-to-jesus meeting with Breda; Kenyon savors his advantage like a starving man at a steak dinner while Zola gives as good as she gets. It’s good craic. (Lisa Buscani)