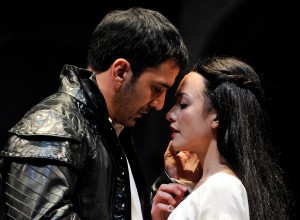 It speaks volumes about the sad state of human affairs when we can describe the story of the repression and destruction of a great, brilliant woman as fairly predictable fare. Predictable perhaps, but still poignant, especially in light of the continuing unabashed cruelty toward women in parts of the Islamic world even today. Perhaps we tsk-tsk these “uncivilized” cultures a bit too much, for it wasn’t long ago that it was Western culture, with the royal court and the Catholic Church at its core, that destroyed many a great woman (and man, for that matter), in the name of God or king.

So even if there is a familiar Joan-like arc to “The Sins of Sor Juana,” now playing at the Goodman, the particulars of the story of this great poet of Mexico are not as widely known. Brilliant, dynamic and beautiful from a young age, Juana Inés de la Cruz was pre-destined for trouble, and in playwright Karen Zacarías’ fairly straightforward imagining of the circumstances of her life, she finds it. Set at the moment when Juana starts to “lose her voice” thanks to the Church’s inability to abide by its promise to let her write, “The Sins” unfolds in a conventional overlapping story line, with an interwoven flashback that explains how Juana came to the Church and, more importantly perhaps, how she found the raw romantic emotions, both conventional and mildly Sapphic, that would manifest so powerfully in her poems.

The set, designed by Todd Rosenthal of “August: Osage County” fame, is a striking manifestation of a Spanish church and monastery in Mexico, so well rendered that I felt one might even climb its tower and ring the bell, which easily converts to the more regal residence of the viceroy, where the flashbacks take place. Henry Godinez ably directs a superb cast, a compelling mix of notable locals and a few out-of-town leads: Malaya Rivera Drew (familiar to fans of “The L Word”) as Juana has just the right mix of feisty and foxy; Dion Mucciacito as her one true love seduces us all, even if we’re in on his less-than-honorable machinations. (I was a bit distracted, however, a couple of times by minor line stumbles, something I’ve not experienced often at the Goodman.) The humor in this production makes the tragedy at its core bearable. 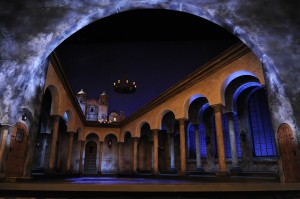 “The Sins of Sor Juana” is the centerpiece production of the biannual Latino Theatre Festival and, as such, features a mostly Latino cast, director, playwright and setting. But the story line offers little to the amateur anthropologist looking to peer into a less-familiar culture: this is the Catholic Church, after all, and the principal characters are all Spaniards, albeit in the New World. Save one character, accents are negligible if present at all. This is not a complaint, but an observation: there is nothing about this production that would not fly on its own, outside of the Latino Theatre Festival banner. Perhaps that’s even a sign of some sort of cultural progress. (Brian Hieggelke)