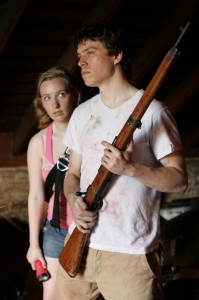 Even amidst total ruination, sometimes there are still more important things at hand. In Daniel Caffrey’s new play “Extinction Fantasies” for his Tympanic Theatre Company, three pairs of characters from a small town struggle to survive after a deadly plague has wiped out the local population, and the only way out, an old bridge, has been demolished. What emerges is a series of intimate moments between people who have nothing else to lose, yet therefore everything to gain. In “Dark Horse,” two high-school students, both of whose parents are dead, find in each other the strength they need to keep surviving. In “The Deer Callers,” a married couple fights to resolve fidelity issues that haunted their pre-plague life. And in “Fevers” and “Fever Dreams,” a father and daughter share stories as the father draws painfully closer to death. The actors all find plenty of emotional action to play in scenes that are largely conversational, and humor, presumably a necessary ingredient of post-apocalyptic survival, keeps afloat with levity a thoughtful, meandering play. (Neal Ryan Shaw)