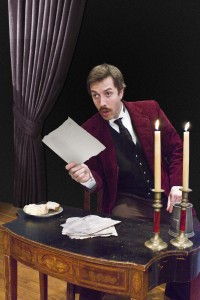 Admit it. When the Civil War comes to mind, you immediately think, “big laughs.” No? Well the creative minds behind “Shoot Faster, Dear Brother, I’m Dying! (a Civil War Comedy),” which takes the stage this week at the Apollo Studio Theater, 2540 North Lincoln, aim to change that.

This idea to write a comedy based on the time of The War Between the States came from an unprovoked email exchange between writer-performer Demian Krentz and writer-performer Joe Anderson. “At the time I was living in Lansing, Michigan. Joe and I had worked on a couple of plays in Michigan and I just decided to write him an email as if I was talking to my brother in a field in a war,” Krentz says. “He wrote me back in the same form and we realized it was turning into a funny idea.”

Krentz explains that the play, about two brothers who live in Virginia while one of them is fighting in the war and its aftermath, is a condensed version of a book they were going to write until they both agreed it would be better acted out. “It’s a ridiculous take on life back then,” Krentz says. “I’m a history nerd; it’s always great to imagine what people who lived before us did.” If you, too, would like to explore the funny side of The Late Unpleasantness, visit shootfaster.com or call (773)935-6100. (Ashley Abramowicz)

I love this show, and I’m not alone…

“Hilarious precision…that O. Henry might have invented after a sojourn in an opium den.”
3 Stars! – Kerry Reid, Chicago Tribune

“People around me were laughing so hard, I saw tears.”
– Bob Bullen, Chicago Theater Addict

This amazingly funny epistolary production is in its final performances and will close July 31. Don’t miss it!