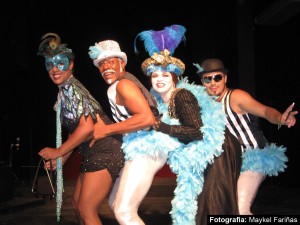 The fifth biennial Latino Theatre Festival at the Goodman, is centerpieced by “The Sins of Sor Juana,” which has been getting mixed reviews, but the real surprises of the festival’s lineup are two performances by Teatro Buendía. The theater company, one of the most highly regarded in Cuba, has never performed in the US before this month. Newcity spoke with Goodman Artistic Associate Henry Godinez, festival curator, about Teatro Buendía’s style, getting the theater into the country, and revolution.

How did you first become familiar with Teatro Buendía?

The company has played all over the world—Africa, Europe, Australia, obviously Central and South America, even the Globe in London. I first saw them in Cuba in 2003, and I had hoped to bring them to the festival back then, but it was just impossible to bring artists from Cuba under the last political administration. This year, with Obama in the White House, we thought we’d try again and we succeeded… they have their visas, and they fly in tomorrow.

How would you describe the company’s style?

Well, it’s a really extraordinary company. Their style of performance is incredibly idealistic, influenced by a lot of the great theater innovators of the twentieth century, like Peter Brook and Jerzy Grotowski, as well as ones in Latin America we’re less familiar with. There’s a combination of Brechtian presentation with this intense visceral quality. They get to the theater hours before the curtain to warm up together, and this ritualistic sense carries over. Their work is very honest and honestly reflects the attitudes towards the government in Cuba today, towards the revolution and its failures and successes. So it’s a unique opportunity to see how Cubans feel about their situation. 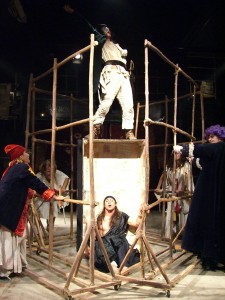 Can you describe the two shows? How do you see them fitting into the festival as a whole?

The first weekend of the show is “La Visita de la Vieja Dama,” the company’s newest adaptation [of Friedrich Durrenmatt’s “The Visit”]. The second show, “Charenton,” has to do with the French Revolution superficially, but it’s really about all revolutions, and a way to comment on the Cuban revolution. To me the loose unofficial theme for the festival is a response to 2010 being the year of the bicentennial of Mexican independence, as well as many Central and South American countries. And Teatro Buendía’s work, arguably about the most famous revolution in the western hemisphere, is revolutionary both theatrically and in the material… it’s revolutionary that a revolution would last so long that in a way art ends up commenting on its shortcoming and unfulfilled promises.