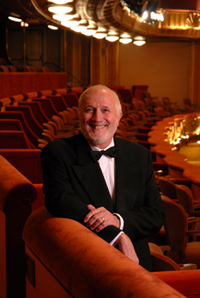 Here are the details from a Lyric Opera press release issued earlier today:

William “Bill” Mason, Lyric Opera of Chicago’s general director since 1997, announced today that he will retire when his contract expires at the conclusion of the company’s 2011-12 season.

Mason, 68, has led the world-renowned Chicago-based opera company since 1997 and has been with Lyric Opera for more than four decades.

“I think two years from now will be the right time to turn the reins over to a new general director,” says Mason, “and I look forward to working with the Board on finding a successor to lead this great company.

“I am privileged to have spent my professional life doing what I love best,” Mason continued, “which is producing grand opera at the highest international level. I followed two exceptional general directors at Lyric: Carol Fox, who founded the company and established its artistic pedigree from day one, and Ardis Krainik, who continued that commitment to excellence while at the same time making Lyric a great civic institution
and a model of fiscal responsibility.

“Throughout my career here it has been a thrill to work with great artists, and a pleasure to serve with outstanding administrative colleagues. I am especially thankful to have collaborated with two extraordinary music directors—Bruno Bartoletti and Sir Andrew Davis. Both are true men of the theater, and working alongside them has been inspiring and profoundly satisfying. I am also grateful to Matthew Epstein, Lyric’s former artistic director, who made such significant artistic contributions to Lyric during the 1980s and 90s. I also have a Board of Directors, a donor and volunteer corps, and an audience that is unfailingly supportive. A general director could not ask for more.

“That said, it will be business as usual for the next two years! We have a antastic and busy season coming up in 2010-11, and I think our audiences will be equally pleased with the 2011-12 season, which will be announced in January. Sir Andrew and I, along with our artistic team, are already deep into planning for 2014-15 and even beyond. I remain totally bullish about Lyric Opera’s future.”

Richard P. Kiphart, Lyric Opera’s board president and CEO, stated that he has directed that a  search committee be established immediately under the direction of Kenneth G. Pigott, executive vice president of  Lyric’s board and chairman of  Lyric’s production sponsorship committee.

“Bill Mason is the consummate opera professional,” says Kiphart, “and the company has been fortunate to have him at the helm. This is a person who lives and breathes opera, and his institutional history is unique in the field. He also understands that fiscal integrity is absolutely essential to maintaining artistic excellence. His successor will have big shoes to fill, and we are grateful that Bill will help us with the search.”

By the end of his tenure, Mason will have presided over more than 120 productions, including more than 40 new productions. Mason is also credited with signing the renowned Sir Andrew Davis as music director in 2000.

Mason succeeded Ardis Krainik, who was general director from 1981 until her death in 1997. Mason joined the Lyric administration in 1962 under Carol Fox, Lyric’s founding general manager.

Prior to his appointment as general director, Mason served as Lyric’s director of operations, artistic, and production for 16 years. He was production director from 1974 through 1978. From 1962 through 1966, while pursuing a bachelor’s degree in voice from Roosevelt University’s Chicago Musical College, he worked as assistant to co-artistic director Pino Donati, learning the practical fundamentals of opera administration.  From
1968 through 1970 he worked in the production department, serving as assistant stage manager during the opera season.

Mason performed on Lyric’s stage as a member of the Lyric Children’s Chorus during the 1954, 1955, and 1956 seasons. He sang the role of the shepherd boy in the famous 1954 and 1956 productions of Puccini’s “Tosca,” which starred, respectively, Eleanor Steber, Giuseppe Di Stefano, and Tito Gobbi; and Renata Tebaldi, Jussi Björling, and Tito Gobbi.

While most of his career has been based at Lyric, Mason also served as the artistic administrator for the San Francisco Opera from 1979 to 1980. In 1973 he was production manager and assistant director for the Ohio-based Corbett Foundation, which provided funding and production expertise to regional opera companies.  In 1972 he worked for the Cincinnati Opera as
production stage manager. Also that year, he worked for the Light Opera of Manhattan, where he assisted in musical preparation, and was also stage manager. In 1971, he was assistant to Felix Popper, music administrator at New York City Opera.

A Chicago native, Mason attended Senn High School and earned his bachelor of music degree in voice from Roosevelt University’s Chicago Musical College. In 2005 he received the Music Institute of Chicago’s Dushkin Award. In 2003 he was awarded the title of Commendatore dell’Ordine Della Stella Della Solidarieta’ Italiana by the Italian government. He also received honorary degrees form Roosevelt University and De Paul University.

William Mason is married to Diana Davis and has two adult children.

Here is a link to Dennis Polkow’s cover story on Mason from October of 2007: http://www.newcitychicago.com/chicago/7037.html