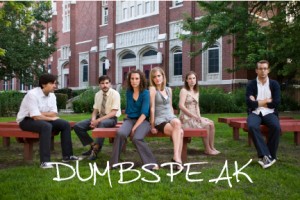 Let me first disclose that I have only seen this middle part of Chelsea M. Marcantel’s self-produced “(a)Symmetry Cycle,” and so do not intend to deliver any sort of commentary on the trilogy as a whole. But in her series of plays focusing on the nature of human relationships through the lens and language of chemistry, Marcantel poses potentially interesting scenarios that alternately make you want to run home to your tenth-grade chemistry textbook or lean in with wonder and bafflement. “Dumbspeak: The Chemistry of Falling Apart” finds Isaac returning after seven years away to reclaim the love of Alice, who had been seeing Peter. Introduce a younger brother and a lesbian couple, all vying for each other’s affections, and you have the stage version of a Chem 101 experiment. The metaphors are convoluted, the words multisyllabic, and the cast, though game, simply too young for their characters’ lab coats. Marcantel cites entropy—which states that heat will not decrease inside of a system, unless it is not isolated—as a central theme to “Dumbspeak,” and in this case heat dissipates along with interest. (Neal Ryan Shaw)