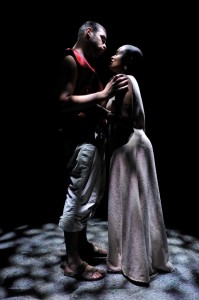 There is a line in “The Drowsy Chaperone” that asks, “Please, Elton John, must we continue this charade?” referencing the British rocker’s ongoing attempts to write Broadway musicals.

Curiously, that trajectory began indirectly when John was asked to write five songs with lyricist and former Andrew Lloyd Webber partner Tim Rice for Disney’s 1994 animated film “The Lion King.” Those hugely popular songs—John’s best “stage” songs to date even if they had nothing whatsoever to do with the plot of “The Lion King,” such as it was—became part of Julie Taymor’s stunning 1997 Broadway production, due back here next September.

The duo was re-engaged by Disney to score two additional animated films, “The Road to El Dorado,” released in 2000, and “Aida,” which was never made. Based on the Verdi opera as it was adapted for a children’s book by soprano Leontyne Price, the definitive “Aida” of her generation, an “Aida” concept album was recorded in 1998, much as Rice had done with Lloyd Webber for properties such as “Jesus Christ Superstar” and “Evita” before they became stage works.

When the animated version fell through, Disney Theatricals put together a mammoth stage adaptation with Goodman Theatre’s Robert Falls as director and one of three credited co-writers, always the signal of a troubled past. It was that version that previewed in Chicago with Heather Headley (Nala in the Broadway “Lion King”) and Adam Pascal (the original Roger in “Rent”) in late 1999 before hitting Broadway in March of 2000, though not before the elephantine scenery that had so many problems—even infamously injuring Headley and Pascal here in Chicago—was simplified before opening on the Great White Way. That version won four Tony Awards, ran for four years and spawned a national tour that ran for another three years but ironically, never came back to Chicago (Joliet was the closest it came).

It would be the last collaboration between John and Rice, though John would go on to write “Lestat: The Musical” based on the Anne Rice vampire novels with his longtime songwriting partner Bernie Taupin, which would close after a mere thirty-nine performances. “Billy Elliot,” which John wrote with screenwriter Lee Hall, who wrote the film that the musical is based upon, has fared much better, although Broadway In Chicago’s hope that the show would run here for years the way that “Wicked” and “Jersey Boys” did will not be the case: it was announced last week that the show will close January 15, 2011, after a disappointing ten-month run.

Meanwhile, “Aida” had gone on to have a life of its own in community theaters and high schools though had not had a professional production in Chicago since its pre-Broadway preview. As such, and no doubt hoping to experience a tailwind effect from “Billy Elliot” playing downtown, new executive director Kevin Mayes thought it would be the ideal first musical for the newly formed Bailiwick Chicago, which emerged out of the former Bailiwick Repertory Theater that closed last year.

The memory of the 1999 production was principally the quality of the performances, especially Heather Headley, and of course, the amazing original scenery and design, which was later simplified. Having enjoyed “Billy Elliot” for its energy and dancing but struck by the banality of its songs, I was curious to revisit “Aida” after more than a decade. 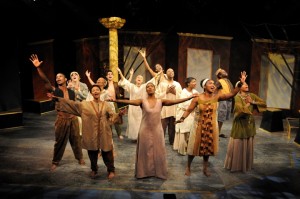 One curious phenomenon that both works have in common is that despite being written by a guy known for writing effective pop songs with memorable hooks, there are no such songs in either “Aida” or “Billy Elliot.” The best and most effective music for both of them, curiously, is the choral writing: the Nubians in “Aida” (Ethiopians in Verdi’s original) and the coal miners’ music in “Billy Elliot.” I have yet to experience Elton John write a true character-driven song for any show which somehow reflects the unique situation a character finds him or herself in, or which somehow advances the plot. It seems ironic that a performer who is so theatrical on stage can have such a numb theatrical sense of how to score for the theater itself. True, the songs are always well-crafted and stylistically eclectic, but tend to be songs that distract rather than enhance the drama. It is as if John is saying, “Look at me, I can write in any style for any occasion, on demand.” And in a sense, he can. What he has not been able to do this far is translate the best qualities of his own pop songwriting style to the stage musical.

All of that said, there is much to recommend the Bailiwick production, which does do a fine job of communicating the music, such as it is, and an even better job of revealing the drama of the work, most of which goes on in spite of the music surrounding it.

Particularly inspired is the decision to cast the lovers Aida (Rashada Dawan) and Radames (Brandon Chandler) as both African-Americans rather than the usual convention of having Aida be black, but Radames be white. Even modern performances of the Verdi opera often follow this notion, but the historical reality is that an Egyptian and a Nubian (or Ethiopian, as per the original) would both be Africans and dark-skinned, albeit an Ethiopian or Nubian would likely be darker than an ancient Egyptian. (Modern Egyptians are thought to be much lighter than their ancient counterparts as they are as much a product of the subsequent sixteenth-century Ottoman invasion.)

The entire cast, in fact, is diverse, and includes energetic choreography by Deeply Rooted Dance Theater artistic director Kevin Iega Jeff that evokes Taymor’s “Lion King” more than previous incarnations of “Aida” in how African it comes across. Director Scott Ferguson has chosen to cast primarily actors and dancers, not singers, but given the material, this is not a huge loss. In fact, unlike the original, you can actually buy that Aida and Radames are in love here, which makes us care what happens to them as the story progresses. And Dawan’s Aida has a delightful edge where she can be a slave when she has to be, but always with pride and backbone. It is easy to see why Radames falls for her, which is often not the case, even in productions of the Verdi opera.

The original production was rather rock-driven, but co-music directors Jimmy Morehead and Robert Ollis have scaled back the guitars and cranked up the synthesizer pre-sets augmented by strings, drums and bass. (Dennis Polkow)