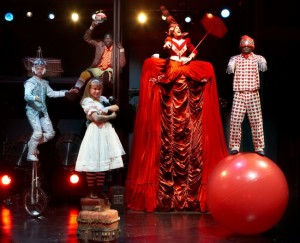 The deceptively simple opening few minutes quickly explodes into a meta-production that encompasses much of Carroll’s “Through the Looking Glass”—with young Alice encountering a sort of adapted chess game in which she slowly advances towards her goal of becoming a queen. Along the way she meets a familiar cast of characters, remarkably played by only four other actors. The performers are given ample opportunity to display their well-developed acting (and movement) skills. Samuel Taylor’s manic White Knight, Molly Brennan’s psychotic Red Queen, Anthony Fleming III’s wild-eyed March Hare and Doug Hara’s contemplative Humpty Dumpty make the most lasting impression.

The constantly shifting stage pieces and quick costume changes leave the set barren one second and done up like a Lady Gaga concert the next. Under David Catlin’s watchful eye, no audience member is allowed to feel bored. What “Lookingglass Alice” lacks in cohesive storytelling it more than makes up for in spectacle, surprise and, most importantly, heart. Though there were plenty of children in the audience enjoying the absurdity the night I was there, the true magic of the show is that it lets adults feel like children as well as we too indulge in the nonsensical.

This is the fourth time “Lookingglass Alice” has been produced by Lookingglass since the show’s origin in 2005. For those who missed “Alice” the last three times, try not to be late for this very important date. (Zach Freeman)