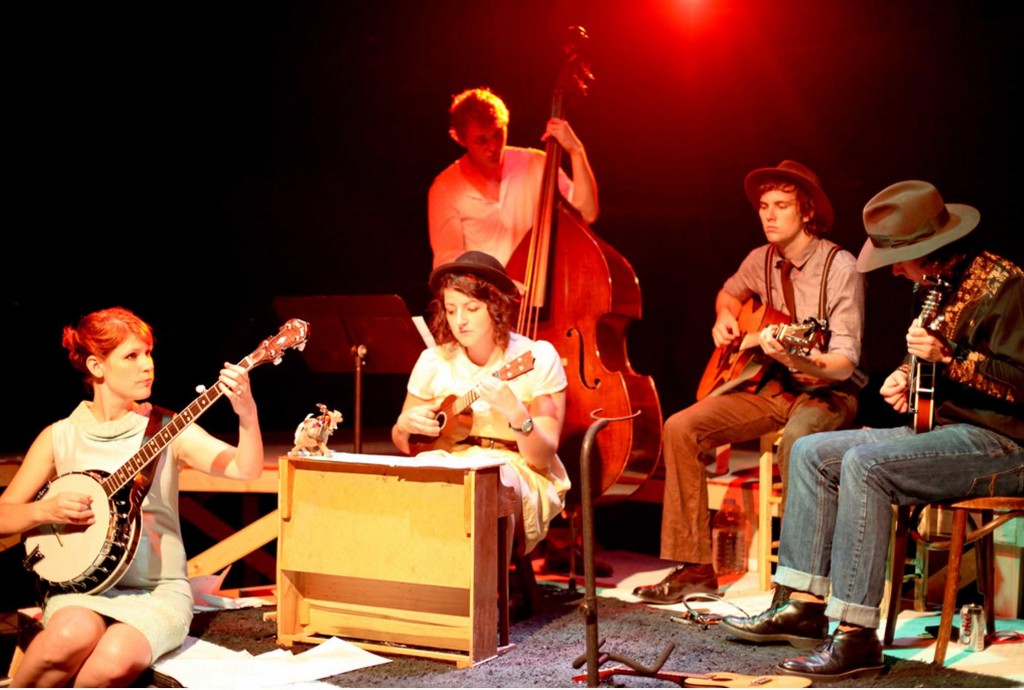 Could The New Colony’s “That Sordid Little Story” be one of the best original musicals that Chicago has produced in years? I certainly think so. Because while not everyone may be a fan of bluegrass, the storytelling could use a tad more attention and the set design is a bit of an interesting mess, there is no denying that “That Sordid Little Story” is dramatically gripping, musically soaring and oftentimes emotionally devastating.

If you haven’t heard of The New Colony, they are a barely three-year-old Chicago collective of artists who create their work in the ensemble tradition, nurturing their pieces—or so I’m told—through long periods of creative gestation which has their roots in improvisation, workshop and experimentation.

For their latest, Artistic Director Andrew Hobgood had a story in mind about a young man circa the early 1960s who finds personal resonance in the music and lyrics of a band named That Sordid Little Story. He embarks on an arduous trek across the Deep South in search of the band’s next obscure gig—today he’d simply hook up with them via the band’s Facebook or MySpace pages—and along the way meets an eclectic cast of characters who for better or worse shape his journey and impart something on his quest for meaning. This is the simple, heart-on-its-sleeve story, for which Hobgood recruited two musicians, Chris Gingrich and Henry Riggs, to begin composing songs whose lyrics and musical flavor would fit the ideas and moments that were being fleshed out on paper and in rehearsal. Two dozen songs, three credited writers, nine actors playing twice as many characters and a “live” five-piece band later, and you have “That Sordid Little Story.”

The play, with its themes of long-lost parents, abandoned or neglected children, crimes of love and hate, revenge, and prophecies fulfilled or averted, is certainly influenced by the great Greek mythologies. It is also reminiscent of American novelist John Irving, as if someone had taken one of his 800-page epics and dramatized it with music for the stage. Irving, of course, blended classical mythology and Freudian psychology into the best of his sprawling tales concerning orphans and emotionally wanderlust characters searching for a place—be it geographic or psychological—that would feel like home. Also like classic Irving, this piece introduces and sustains secondary and even tertiary characters for brief or very long periods of time, characters that are able to make a huge impact on an audience and compete with the main protagonists for our attention. We may never see these characters again, but they are integral to the overall experience and their scenes invoke the larger themes and ideas on a micro level. That’s not to say every scene in “That Sordid Little Story” should last as long as some do here, a fact that contributes to the play’s nearly three-hour, three act and two-intermission long running time. Trims could be made, and especially from scenes that feel as if they eventually descend from impressive improvisation into self-indulgent ad-libbing. On the other hand, there’s a gloriously constructed scene late in the second act in which a strictly Spanish-speaking Mexican character struggles to communicate—in English—one of those valuable life lessons to our main protagonist. We understand soon enough what the character is trying to say, but Hobgood makes us suffer through—and I mean that in a good way—a long sequence in which the character desperately tries to translate his thoughts into English but cannot. Once he does, however, the denouement, complete with rousing musical accompaniment and followed by the perfect song, is one of those transcendent moments of glorious dramatic payoff that could only happen in the live musical theater. 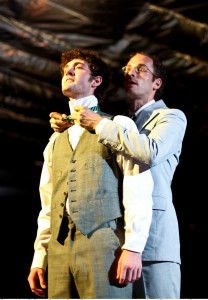 As for Gingrich and Riggs’ score, it was written in collaboration with Thea Lux and Tara Sissom and is performed by all four including bassist Brandon Ruiter, who rounds out the quintet. The music has been characterized as bluegrass, but to me it sounds like folk infused with a sprinkle of singer-songwriter rock. It’s something that Rich Warren would happily play on “The Midnight Special,” and something I’d happily go off and buy after hearing it on his radio show. Everyone does vocals, with the lovely Lux sounding like a young Carolyn Hester, and the darker-voiced Sissom and her melancholic yodels or twangy deliveries reminding me of another folk favorite, singer Nanci Griffith. Unlike in a typical musical, where the characters and the actors playing them are launching into song, the songs here, performed only by the band with the exception of a few large-ensemble pieces, comment on the action or are used to express the internalized feelings of those acting on stage. In this way, you might consider “That Sordid Little Story” more of a play with songs than a musical, or a piece of writing with a terrific soundtrack where the songs and lyrics have been perfectly calibrated to match and/or underscore the onstage drama. The song catalog of T-Rex as it was used for the movie “Billy Elliot,” or the brilliant “Vanilla Sky” soundtrack to the Cameron Crowe film of the same name, immediately comes to mind. As a big fan of folk and the likes of The Midnight Special I’m biased already for what I feel is nonetheless a sophisticated, toe-tapping and harmony-rich score. But I think anyone with a good ear for melody and joyous rhythm would be hard-pressed to find themselves allergic to the musical experience here.

The set, on the other hand, is another (sordid) story. The Viaduct has been taken over by a series of cantilevered platforms, a huge U-shaped barroom that sits dead center (but is only seldom used), a room in the foreground full of antique bric-a-brac (that is never really used), some side areas that are slightly obstructed from view and none of which are lit too well. It’s an environmental monster of a set, for sure, almost engulfing the audience in its splendid squalor. But with several dark pockets of performance space that look empty and go unused, it’s almost as if set designer John Holt had the brilliant idea to seat the audience within and among these platforms and walkways, but then lost his nerve. The stage traffic is also awkward at times, with large distances the actors must cover between scenes and unremarkably lit pools of light rendering director Hobgood’s cinematic attempts at stage dissolves and cross-cuts clumsy at times. Ultimately, the foreboding Viaduct hasn’t been exploited to its fullest here—one imagines what the piece would feel like if it had—and the downside is that there is sometimes a sense of physical exclusion from the story and action, even as the play is successfully working to emotionally pull you in.

But some of these are minor cavils when considering how rich this material, some of it still raw, truly is. Indeed, there is a fantastic score worth exploiting here, pockets of narrative that could be trimmed while others expanded in an already absorbing tale with arresting characters, and a universal story that should resonate for anyone with a pulse and a heart. Even in its nascent state, “That Sordid Little Story” is a brilliant piece of total theater, and if there’s any justice in the world it will have a long life beyond Chicago. See it here first. (Fabrizio O. Almeida)