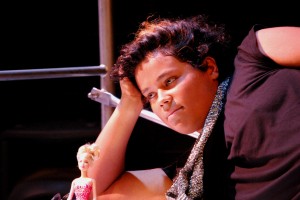 As a living, breathing, historical record of where queer youth culture was in the early part of the twenty-first century, About Face Theatre’s “Queertopia” is an important show. Subtitled “The Anti-Violence Project,” this eighty-minute, collage-structured, professionally produced and youth-performed oral history project boasts opening moments of real theatrical magic, courtesy of director Sara Kerastas, choreographers Patrick Andrews and Donnell Williams, and costume designer Jillian Gryzlak. Grant Sabin’s minimalist set design—silver metal structures of stairways, platforms and scaffolding, as if the audience were about to take in a futuristic sci-fi “West Side Story”—is also something to behold.

A black drag queen, outfitted in high heels and a navy and white polka dot-fitted dress—Christian Dior would have loved it—breaks the fourth wall and becomes our hostess to Queertopia. She bookends the play and doles out enough camp and ‘tude to make RuPaul want to hang it up. A pile of intertwined bodies, what looks like the aftermath of a strenuous game of ultimate Twister, is actually the eleven young cast members who will go on to play all of the kinky denizens of Queertopia. They start twitching and the clump of bodies begins to convulse spastically as they unglue and separate. When they finally come to individual life, representing a cross-section of queer youth in every color, shape and gender identification in the rainbow, the audience is treated to a dynamic large group dance number with a spirit that recalls the terpsichorean joys of a 1980s episode of “Fame.” (It must also be said that Gryzlak’s costumes—leg-warmers, satin jackets, bold primary color clashes—could have come straight out of one of those episodes, too.) Finally, an actor begins flipping cue cards in a visual homage to Bob Dylan’s “Subterranean Homesick Blues” film clip, or since we’re talking 1980s, like they do in that “Need You Tonight” INXS music video. The cards feature the names of gay and gay-friendly artists and activists—many of them dead before any of these performers were even born—whose lives and work made it possible for LGBTQ folks to be where they are today.

It’s this brief but dazzling laundry list that makes an educational piece like “Queertopia” so important for young queer people to see today. Written and edited by journalist and educator Paula Gilovich from the workshopped writings of the About Face Youth Theatre Ensemble, the piece is giving a much-needed sense of history and belonging to the marginalized queer youth of today and tomorrow. After all, it’s these individuals who paved the way for a “place” like “Queertopia” that we see onstage. It’s a place where a biological born male/female-identified girlfriend can give her biological born female/male-identified boyfriend (got all that?) the most thoughtful and romantic gift of all: a syringe full of Testosterone (“T”). It’s a place where the deceased father of an African-American queer teen, the old man a firefighter no less, is discovered to have been a homosexual himself. In Queertopia, this isn’t a problem. In “Queertopia,” the ghost of the gay-fireman father doles out queer-friendly advice on navigating the tricky waters of gay adolescent angst and all is well with the world. 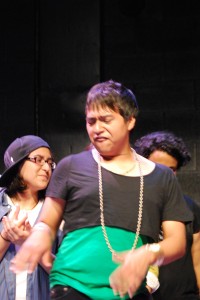 Whether, as they say, we’re actually there yet is beside the point. The piece’s existence alone suggests that we’re on our way. And its documentary-like catalog of contemporary queer youth and their complex interpersonal dynamics is stunning. Caucasian. Hispanic. Indian. Black. Male. Female. Femme. Butch. Gay. Lesbian. Bisexual. Transgender. Queer. Coexisting, loving, hating, failing, betraying and supporting one another. These queer kids are not just all right, they are the theatrical answer to Kath Weston’s 1991 book, “Families We Choose: Lesbians, Gays, Kinship,” in their sociological veracity and representation of the voluntary unions and complex infighting that characterizes the LGBTQ queer youth community today. On this intellectual and conceptual level, “Queertopia” unquestionably delivers. This is a good thing since as a piece of pure drama—that fabulous opening and a few other moments notwithstanding—“Queertopia” doesn’t always deliver, and is in fact a little dull at times, the subtext of many vignettes boiling down to queers = good, close-minded straights and bible thumpers = bad. Life isn’t always that black or white, of course, and not everyone can be a Tom Stoppard in the theater and achieve that perfect blend of scholarship and drama. But Gilovich does a respectable job, and ultimately her work is true to About Face Theatre’s mission statement to create works that are equal parts activism and theater-making.

I just wish the activism and theater-making synthesized more often into an organic and dramatic whole. (Fabrizio O. Almeida)