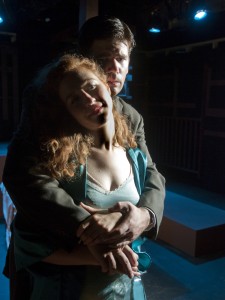 Clocking in at an epic three hours and serving as an autobiographical allegory for Arthur Miller’s own personal life, including his failed marriage to Marilyn Monroe, “After the Fall” has never enjoyed the popularity of his other more celebrated plays. That is a shame, for as Eclipse Theatre’s current and rare production that serves as the centerpiece of its entire season of Arthur Miller plays demonstrates, this is a remarkable work full of insight and revelation that can be appreciated even if you know nothing of the real-life events that spawned it.

It would be difficult to imagine a romance and subsequent marriage less likely nor more publicly scrutinized than that of polar opposites Miller, America’s most lauded playwright, and Monroe, blonde bombshell and pop-culture icon. For the destructive effect of that relationship on both of them personally and professionally to become fodder for a Miller play two years after Monroe’s suicide was too much for critics and audiences to accept at the time. Despite Miller’s insistence that the work was no more or less autobiographical than any of his other plays, the similarities were too much to bear for a wound so recent and most viewed it as Miller’s exploitive attempt to assuage his own guilt for having left Monroe before her self-destruction.

To add to the irony, Elia Kazan directed the original production and the collaboration became the first contact between Miller and Kazan since Kazan had infamously “named names” of Hollywood elite with suspected Communist sympathies during the infamous 1950s House Un-American Activities Committee (HUAC), something Miller was fined, nearly jailed and blacklisted for not doing himself. Miller had the last laugh, though, not only by transposing that modern-day witch hunt back to Salem in “The Crucible,” but by having Kazan oversee a subplot here where one character asks permission to inform on another and is refused: “If you do it, you are selling me for your own prosperity… If everyone broke faith, there would be no civilization.”

Despite all of the ink spilled over Maggie, the Monroe-like character who, in this production, is evocatively played as a paradoxically overconfident yet insecure sexy redhead by Nora Fiffer, seeing the entire epic play virtually uncut—a rarity—we are reminded that she is actually one of three consecutive wives of the Miller-esque character Quentin, performed as a Capra-like Everyman by Eclipse artistic director Nathaniel Swift. 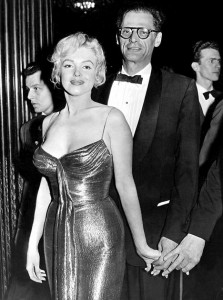 Like Miller himself, Quentin is considering a third marriage as the play begins and is thinking out loud about the various relationships in his life—parental, sibling, friends, business and romances—that have brought him to this juncture. The text states explicitly that everything is happening in Quentin’s mind, and all of these characters appear as a huge crowd played by a first-rate ensemble cast in a pre-dialogue prologue, whispering at first in Quentin’s ear, but gradually becoming a chaotic crescendo before disappearing altogether, a nice touch by director Steve Scott not in the stage directions that is also powerfully re-evoked in the play’s climax.

Swift’s Quentin is brilliant in the narrative sequences which are played out in an almost pre-“Pulp Fiction” non-linearity and ferocity, but rather wooden as the “narrator” of the show, rarely looking at, nor directly involving, the audience. He suggested in a post-play audience discussion that he was imagining all of this as a therapist session when a lady asked quizzically who he was actually talking to, but if so, it would be far more effective to use the audience itself as the therapist rather than blankly staring out at what seemed to be an imaginary disco ball.

What shines through this play is a remarkable, even if, as is so often the case in Miller’s plays, an often testosterone-laden astonishingly sobering self-awareness of failure and futility. Indeed, what irked so many at the time was that Miller seemed to be washing his hands of his second wife’s self-destruction, but the play itself never suggests that. Indeed, lines such as “Who can be innocent again on this mountain of skulls?” and “The only one I will ever love is my daughter,” who is never shown, by the way, sets the record straight. (Dennis Polkow)