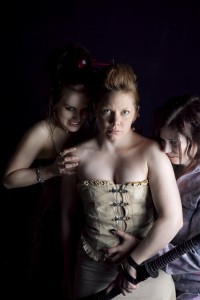 Dream Theatre Company closes the book on their ambitious Agon Trilogy with “Orestes,” which finds the Audience (both literal and literary) following Electra’s journey into hell to rescue her dead brother after the events of her own eponymous play. Once again departing radically from the story points of the original “Oresteia,” Jeremy Menekseoglu’s play unfolds as a sort of Greek Myth Greatest Hits Jukebox, as Electra encounters the likes of Pandora, Persephone, Medea’s children and Agamemnon himself along her way to find Orestes.

Dream Theatre’s sense of world creation is impeccable, with a forest-of-planks set, noirish lighting and edgy costumes. Design-wise, only the soundtrack, packed with big band jazz, British music hall and hard rock numbers, might be considered a misstep. Ultimately, the plot of “Orestes” meanders from set-piece to set-piece with too little urgency, caring more to comment somehow on mythology and storytelling (and why do the characters keep referring to us as the all-seeing “Audience?” What does that mean?) than getting to the nitty-gritty of Electra’s epic quest. DTC’s road to hell is indeed paved with good intentions, and little more. (Neal Ryan Shaw)