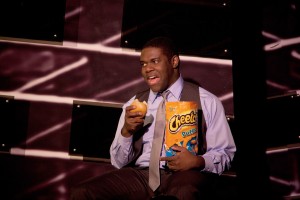 The opening gag in Second City’s 98th mainstage revue dares audiences to break the fourth wall, and it involves not a single cast member in sight.

It is a radical moment (best experienced firsthand) for such a mainstream, name-brand comedy theater.  At Second City, audiences have been conditioned to assume nothing too uncomfortable will be asked of them, but suddenly that usual sit-back-and-relax ethos becomes sit-up-and-take-notice.

I don’t want to oversell what is really just a brief moment in the show, but it does upend the Second City formula just enough to suggest that “Spoiler Alert: Everybody Dies” might be headed in some intriguing and unpredictable directions. That the show is in fact as traditional as any of its predecessors probably isn’t that surprising.

I find it’s best to assess Second City on its own terms—the comedy is of a certain type and style—and director Matt Hovde and his cast have brought strong concepts to the stage. The execution is another matter.

High-energy performances aside, the material acquires a phoned-in quality as each sketch rolls along to an obvious conclusion. Take, for example, the cocktail-party scene where the chatter is comprised of flagrantly erroneous facts about current events: “Guess who caused the oil spill?  Comcast.”

Great premise, mild execution. And that’s the overriding vibe, with a few exceptions. (Timothy Edward Mason’s pickup-artist routine would not be one of those exceptions. As predictable and clichéd as “Defending the Caveman,” it’s a waste of Mason’s considerable talents.)

The assets arrive in the form of a fantastically cool set design from Amy Jackson, who has conceived a linear, fractured photograph/geometric collage of modernist building exteriors and shiny black appliqués. (This is the first set that has a three-dimensional, almost fine-art feel to it, and it looks extremely high-end.) 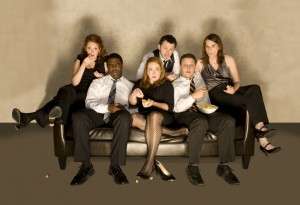 But you want to know about the cast. Second City’s shows live or die based on the unique attributes of each performer and their ability to think comedically as a group. The current ensemble is about midrange on both fronts. The new faces include Tim Robinson, who strikes me as a cross between Art Carney and Jonah Hill.  More than anyone in the cast, he has a way of bringing small details to random, inconsequential moments. The way he pantomimes scooping up a pair of non-existent breasts and licking them like ice cream cones is a perfectly bizarre non-sequitur that shouldn’t be as funny as it is.

But Robinson’s offbeat efforts aren’t enough to counteract the abundance of long and meandering scenes weighing down the show. The material could use a sharper focus and faster rhythm, including Robinson and Shelly Gossman’s dorky, well-meaning parents who speak in a language of malapropisms: “Knock it off, I don’t like it when you’re so self-defecating.”

Also new to the mainstage is the very likeable Sam Richardson (last seen as Roland Burris in Second City’s “Rod Blagojevich Superstar!”). He has a strong presence and a good instinct for characters, but not yet a defined persona within the cast itself.

His big solo scene has him playing an oafish, Cheetos-chomping character who sounds derivative of those comedy bits that show up between songs on a rap album. It’s another example of a good premise that needs more work, although Richardson and fellow newcomer Allison Bills have a terrific scene as a pair of flirtatious, heavily accented immigrants manning food stalls at Taste of Chicago. Most sketches are self-contained, but this one feels like the beginning of a larger story.

I also liked the threat of something dark arising from the sketch between Mason and Gossman as two strangers caught up in an existential debate about (and justification of) asshole behavior.  Someone with the verbose, encyclopedic intellect of a Quentin Tarantino would have a field day with this; so would a straight-faced satirist like Stephen Colbert. And presumably, so would Mason (channeling something both handsome and psychotic) and Gossman (pinched and conflicted) if they hadn’t chickened out—pushing through the scene as if anything too probing or personally revealing would kill the comedy rather than deepen it.

The best sketch is the simplest, riffing on the epic eleven-hour tennis match at this year’s Wimbledon. There isn’t much too it beyond the silly accuracy of its details, but it works. Mason’s exceedingly proper chair umpire is a clever bit of comedy, and the sketch—smart and uncomplicated—looks unlike anything else in the show. (Nina Metz)