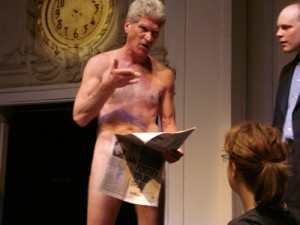 Don’t confuse this show with the one currently running at Chicago Shakespeare! Based on the Hans Christian Andersen tale of the same name, “The Emperor’s New Clothes” repositions the well-known fable as a political PR team attempting to distract a disgruntled public from a political scandal of epic proportions with a fashionable, expensive parade. As Mayor of Los Angeles, and head perpetrator of the scandal, Don Claudin is the perfect pompous politico, providing the majority of the show’s laughs (of which there are few). It’s a thought-provoking idea, but unfortunately lacking in execution. Sound cues occasionally overpower the dialogue and director Carolyne Anderson needs to give her actors more inspired blocking for those sections of Keely Haddad-Null’s script that get especially talky. There’s a good piece of work in here somewhere but it needs further refinement to truly shine. On the plus side, mixing full-on nudity with overtones of political corruption is sure to thrill tea-baggers of all stripes. (Zach Freeman)