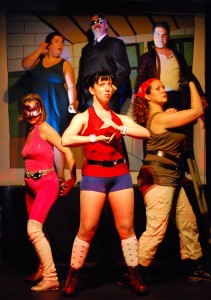 Do you love theater? Do you love comic books? Do you love them both at the same time? The Factory Theater, with their new show “The League of Awesome,” certainly does. But given the on-again, off-again status of the beleaguered Spider-Man musical, it’s difficult to be optimistic about the theater’s capacity for earnest superhero plays. The Factory, therefore, takes the easy route and goes straight for the parody. In a fictional comic-book city, the members of The League of Awesome have imprisoned the last of their fair city’s super-criminals (who is also the ex-boyfriend of one of them)—until, one year later, he escapes with plans to take over the world. The play for a while is relentlessly funny, with Japanese koken stagehands cleverly supplying the superheroic magic. Cowriters Corri Feuerstein and Sara Sevigny, along with director Matt Engle, certainly know their comic-book archetypes, but all is lost when it comes to sympathetic characters. The jokes grow tiresome and by the end you realize there’s little substance behind the heroes’ gaudy masks. (Neal Ryan Shaw)