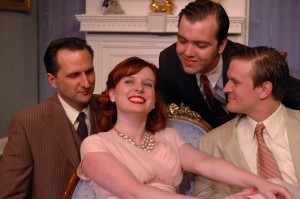 Having had several unsuccessful films in a row and being infamously included on a movie-theater owners’ list of late-1930s movie stars that were considered “box-office poison,” Katharine Hepburn turned to Broadway and her friend and playwright Philip Barry to come up with a stage vehicle to help rescue her sagging career. “The Philadelphia Story” was the end result and, with its lead character having been written expressly for Hepburn, fit her comedic and dramatic strengths like a glove.

The play was a huge success not only in New York, but across a national tour that Hepburn headlined, not only regaining her popularity virtually city by city, but far exceeding it. Hepburn shrewdly financed the play and retained a large percentage of the play rights for herself rather than take a large salary, and just to make sure that when a movie version would be made that she would be the one to star in it, had her boyfriend Howard Hughes buy the movie rights for her, which she sold to MGM, complete with director and co-star approval.

That 1940 film is so iconic that it is hard to put aside when seeing “The Philadelphia Story” as a play, not helped by the fact that some of the current Circle Theatre cast seem as if they had been watching it a bit too closely in putting together their portrayals. Laura McClain’s Tracy Lord seemed to be virtually a caricature of Hepburn in the early part of the opening act, which was toned down a bit as the evening progressed. Likewise, Josh Hambrock’s Macaulay Connor was gawkishly suggestive of James Stewart; only Kevin Anderson’s C.K. Dexter Haven, the Cary Grant part, seemed to escape the film influence completely but was so uninteresting that there were moments when you began to cheer for his competing suitors. Even so, the quality of the material and the comedic high jinks are executed with enough flair here that this makes for a fun evening nonetheless. (Dennis Polkow)