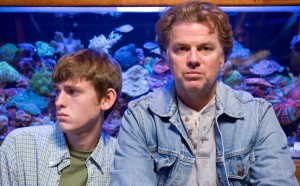 Joel Drake Johnson’s latest at Victory Gardens explores redemption and the long, strange trip guilt takes us on. Thankfully, the destination is as satisfying as the journey.

Ex-con Doug (Kevin Anderson) has no place to go. His sister (Meg Thalken) is absent, so he’s forced to endure his uber-anal-retentive brother-in-law Phillip (Francis Guinan). The two manage to integrate each other into their respective mental prisons.

The piece’s mood shifts can be tough to keep a handle on; both Doug and Phillip act out without pattern. But Guinan and Anderson make up for it with killer rapport and razor-sharp timing; a simple bed-making scene is heartbreakingly hilarious. Bubba Weiler holds his own as the “lying, manic-depressive” son trapped in his own cruel adolescent reality; Sandy Shinner’s direction keeps the pacing and the physicality in check as the characters seek relief from their burdens and the seemingly unobtainable vision of their futures. (Lisa Buscani)