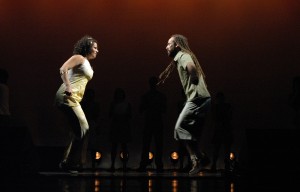 Tap dance, like jazz music, is an intrinsically American art form: improvisatory, rhythmically dynamic and playfully competitive, sprung from Harlem clubs in the early twentieth century where soloists would take turns besting one another in virtuosity and wit. Unlike jazz, tap remains for the most part outside the greater American dance institution, performed for ticket-paying audiences at revered venues as infrequently as it is offered in the curriculum of degree-seeking university dance programs (i.e. about once per annum), relegated instead to student clubs, studio recitals and—less frequently since the passing of Hollywood’s golden age—Broadway shows.

“There isn’t any infrastructure for American tap in the establishment now,” says Lane Alexander, founder of the Chicago Human Rhythm Project, and arguably creator of the infrastructure for American tap in the Midwest. “There aren’t any dedicated spaces for tap. It’s a big deal for the tap community to be presented at the Museum of Contemporary Art. Peter Taub [the MCA’s performance programming director] led us in the door and we felt his embrace of the community needed to be recognized.”

This is the ninth year the MCA—a venue known for presenting experimental, controversial and hard-to-get international performances—has hosted the hoofers, beatboxers and un-categorizable percussive artists associated with CHRP. In thanks, CHRP is honoring the MCA alongside the tap greats pounding the stage in three separate programs, focusing on virtuoso soloists, educators and international companies, and tap ensembles, respectively. This year’s series of performances is the culmination of CHRP’s annual Rhythm World festival, a fortnight of conferences, workshops and courses. Rhythm World is effectually the world’s biggest tap summit; well over 400 dancers from across the globe will attend to teach, learn and perform.

This is CHRP’s twentieth anniversary and Alexander has seen his alum grow up and become venerable artists in their own right. “This is a milestone for the field. Festivals have sprung up—this is the oldest and largest, but others are right behind us. Our baby institutions are starting to mature,” Alexander says. “As you see the kids grow up and they’re starring in “STOMP” and Jazz at Lincoln Center, and you begin to see the impact the programs have on kids and the contribution they have on the art form it’s just amazing to me, it’s really exciting.” (Sharon Hoyer)