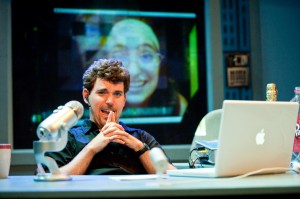 At one point in “Talk Radio, ” an old woman calls into Barry Champlain’s radio show complaining about the lack of new “I Love Lucy” shows. Nonplussed, Champlain yells at her, “Do you know what year this is?!” and says Lucille Ball must be really old by now. Written in 1987, this line made sense two years before Ball’s death. Yet with a state-of-the-art social-media concept and not one but two sparkling Mac computers on the set, we might do well to ask the same question of the State Theatre. Concerning an adventurous Cleveland talk-radio host on his last show before it goes national, the production suffers from a basic lack of good old-fashioned script analysis. The social-media concept, which includes a live Twitter feed (the audience is encouraged to tweet and take pics) and Skyping callers, is ambitious but has no place next to references about hippies and the Vietnam War. If anything saves the show it’s the versatile cast portraying the variety of strongly written characters for which playwright Eric Bogosian is known. Now with one full season under their belt, the State has shown a penchant for ideas so crazy they just might work. We’ll see what next year brings. (Neal Ryan Shaw)

The State Theatre of Chicago at the Boho Theatre, 7016 North Glenwood. Through August 15.