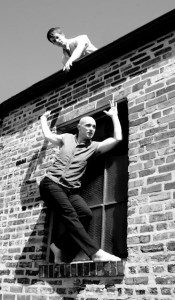 Here’s the concept: a panel of dance experts from Chicago, New York, LA, San Francisco, Seattle and Philadelphia convene in Chicago to collectively select twelve choreographers from each aforementioned city to participate in a competitive performance series judged by audience vote. Both experts and audience judge the artists on four criteria: Potential, Originality, Execution and Merit (it spells POEM by design). The winner takes home $10,000. Take a TV game show, reduce a season of elimination to two rounds, replace the amateur competitors with serious dance artists, toss in the opportunity for actual dialoguing with the audience beyond woots and text messages and you get The A.W.A.R.D. Show!, or Artists With Audiences Responding to Dance—the acronym-mad performance series that, despite a title that’s trying a bit too hard to garner excitement either sincerely or ironically (I’m not sure which, though the exclamation point certainly suggests the latter), does a number of exciting things for the dance community on local and national levels. One is that choreographers are given the chance to receive substantial feedback from the audience both verbally and in writing, and the audience is in turn able to share their thoughts, substantial or otherwise. Another is that the participants are chosen by dance experts who have never seen or heard of them before. This means lots of brilliant, innovative, independent artists and smaller companies were seriously mulled over by heavy hitters from the Joyce in New York, On the Boards in Seattle, Dance Affiliates in Philly and the Dance Center of Columbia College, among others. The result is an eclectic mix of artists you probably wouldn’t see on the same program at the Dance Center had the panel been entirely Chicago-based judges.

For example, this year’s program includes an expected contingency of impossible-to-ignore contemporary/modern dance folks—from Hedwig, Mad Shak, Same Planet Different World—but also Elements Contemporary Ballet, the only ballet company on the program, and experimental movement artists Ginger Krebs and Andy Braddock, who have created a surrealistic piece that Krebs characterizes as “descriptive of more subtle states of being rather than telling a narrative.” Throw in a piece by Peter Carpenter who is, like, Mr. Narrative and you have a pretty interesting and disparate sample of what’s going on in the Chicago dance world right now. The challenge for the dance fan will be selecting which of the three first-round performances to attend. In the spirit of The A.W.A.R.D. Show! I suggest securing tickets for the night that has the most artists with which you’re unfamiliar. (Sharon Hoyer)