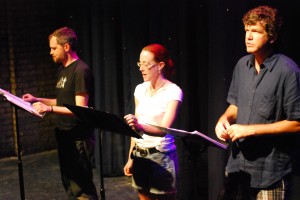 Lifeline Theatre and Live Bait Theater offer a smorgasbord of storytelling experiences by presenting the fourteenth-annual Fillet of Solo Festival. Fans of the solo performance medium should have no problem finding something to enjoy at the festival, which performs at a variety of locations in Chicago over the next few weeks.

Last weekend’s offerings included performances by three members of 2nd Story recited stories that, though otherwise disconnected, were told in an interwoven fashion that echoed one another in parts. Following 2nd Story, the storytelling collective Sweat Girls delivered five monologues, under the title “The Sweat Girls are A-Gaga!,” that touched on late motherhood, first-time home-buying and seeing your child off to college, among other topics.

If these performances were any indication, the Fillet of Solo Festival shouldn’t disappoint. The festival has programmed such a wide variety of performers, the only caveat is that even a little research into who is playing on a given night will go a long way. (Neal Ryan Shaw)