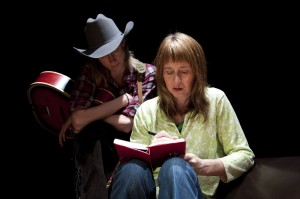 “Late: A Cowboy Song” is the kind of play that traffics in feelings and emotions more than it does concepts or themes. That’s not to suggest this Chicago premiere, by playwright Sarah Ruhl, is bereft of ideas. Far from it, the play has huge things to say about relationships, love, the elusiveness of happiness and, to a more subtle degree, the touchy subject of gender roles in society and the gendering of intersex babies. But it’s told so simply and directly that it tugs at the heartstrings and connects with the soul, and makes the experience memorable for how and what you felt while watching it. It’s afterwards that you marvel at how something so simple could ultimately be so complex. And concurrently how something so complex could come across so simply. Considered intellectually, it’s brilliant. Considered emotionally, it’s human. These are the marks of a great play, and I wouldn’t be surprised if “Late: A Cowboy Song” quickly becomes a modern classic. In Piven Theatre Workshop’s production, under the flawless direction of Jessica Thebus, and boasting three amazing performances, it already feels like one.

We’re given very little to go on as the play unfolds in a series of domestic snapshots. Mary (Polly Noonan) and Crick (Lawrence Grimm) have been “in love” since the second grade. Mary works and has some savings. Crick doesn’t. Mary becomes pregnant. They wed. Crick gets a job as a security guard in an art museum. Their baby is born intersex but is deemed a girl. Crick loses his job. And all throughout, Mary has an emotionally fulfilling relationship with an androgynous female cowboy named Red (Kelli Simpkins), a friendship that strains Mary’s marriage to Crick. The fascinating thing here is what the playwright has purposely left out, the withholding of details that makes it possible for us to contemplate a hundred different scenarios that may have brought the characters to their present predicament. Simple yet complex. Complex yet simple. This theme is echoed throughout the rest of the play’s deceptively mundane topics. Indeed, there are fascinating monologues on how to prepare Asian clear soup, and humorous riffs on the origins of Memorial and Veteran’s Day. And at one point, the character of Crick describes his favorite painting at the museum as simply “white on top, red on the bottom.” Could he be referencing Mark Rothko’s White Over Red from 1956? In the way that a simple clear broth can offer a complex fusion of flavors, in the way that there is more meaning to our “war” holidays than a three-day weekend, and just as there is deeper meaning and complexity to Rothko’s abstract designs than simply shapes and colors on oil and canvas, the lives of these individuals are at once simple yet complex, complex yet simple. 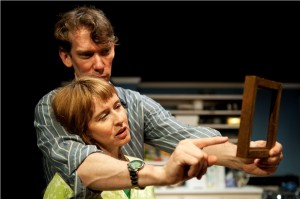 If “Late: A Cowboy Song” reminds one of Ibsen’s “A Doll’s House” in its portrayal of a woman struggling to free herself (from her past? from her own self?), if its beautifully calibrated and staccato relationship vignettes recall Pinter’s “Betrayal” in design, the play’s comic sensibility and dramatic playfulness is quintessential Ruhl. And in actress Polly Noonan, this playwright has her perfect interpreter. Diminutive in size, delicate in facial features and equipped with a youthful voice that amazingly still sounds as it did almost twenty-five years ago when she played the “Gummi Bear bus girl” in the late John Hughes’ “Ferris Bueller’s Day Off,” Noonan is like a grown-up Changeling Child who radiates kindness, vulnerability and quirkiness all at the same time. It’s heartbreaking to see her character mistreated, or worse, potentially in harm’s way, because her presence is so maternal and safe. What isn’t safe, however, are Noonan’s acting choices, and her tendency towards the unconventional line reading or the eccentric facial expression, alongside that instinctual gentleness, makes for an enigmatic, multi-layered and ultimately fascinating performance. I seriously doubt if Noonan ever gives the same performance twice. As Crick, her immature, socially inept yet unpredictably violent husband, Lawrence Grimm brings great depth, empathy and understanding to a character that in less experienced hands could have turned out to be a monster. As the female cowboy Red, whose no-nonsense love for Mary defies gender and sexuality and is the heart of the play, the tall and lean Kelli Simpkins uses all her height and swagger to win over not just Mary, but also the audience. And she can sing the hell out of composer Amy Warren’s original songs, too, folk/country ditties which add a haunting musical resonance to an already moving and poetic experience. Of course, it is these kinds of versatile, seemingly spontaneous and almost effortless performances that make it seem like the director was little more than a glorified stage manager. And although director Jessica Thebus adds some gloriously smart bits of stage business and design—Crick playing a makeshift game of Jenga with cereal boxes; a cluttered apartment for Mary and Crick’s emotionally messy lives; simple projections and free, open spaces for Mary and Red’s scenes—her greatest work here as director is that she’s orchestrated almost every moment to seem completely organic and real. Indeed, her work is impressively simple yet complex, complex yet simple.

“Late: A Cowboy Song” is an artistic triumph for everyone involved, easily one of the best adult playgoing experiences around, and in the postage-stamp-sized Piven Theatre Workshop, it makes the case for the power of the great play in a tiny space. (Fabrizio O. Almeida)