by Brian Hieggelke
August 3, 2010Filed under: 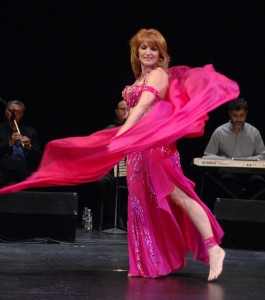 Although belly dancing may conjure images of an exotic women dancing a seductive way, the practice is actually an esteemed Middle Eastern tradition. Jasmine Jahal, a world-renowned dancer, put together the Shimmyfest Gala to show off this unique dance style.

This is the eighth time she’s organized the week-long workshop that started August 3 and runs through August 9. “People come from all over the world to work with Middle Eastern techniques and improv.” Students at Jasmin Jahal School of Dance at all different levels also participate in the event.

The Shimmyfest Gala, a public performance at the center of the workshop, also features live music. “Workshop participants will dance improv style to live Arabic bands,” Jahal says.
Jahal doesn’t perform the more familiar belly dancing known to the Western world, but one practiced in Egypt, Syria, Jordan and Turkey. It is an Arabic-based cousin to styles like Flamenco, one that shows up in records reaching back to 400 BC. “Through the ages the dance has evolved quite a bit,” she says. “America has only been aware of this style since the late 1800s.”

Jahal works to reveal the authenticity of the style. “My crusade has been to raise the standards of this dance and bring it to the theater,” she says.

As an American girl studying ballet, Jahal grew up learning about dance. “I started exploring other dance forms and by chance tried a belly dance class.”

“I began studying it and every time I touched it, I found it to be such a positive experience.” Through her career as a Middle Eastern dancer she has taught as well as danced in Cairo. She opened her dance school in Chicago where people come all over the world. “It’s been as really cool journey,” she says. (Ashley Abramowicz)