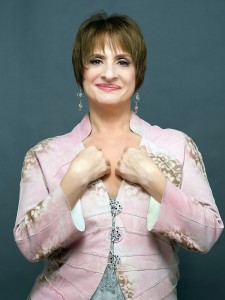 Patti LuPone initially came to prominence originating the completely sung role of Eva Peron on Broadway in “Evita,” for which she won a Tony Award. Her career took a tumble however, when after originating the role of Norma Desmond in “Sunset Boulevard” on London’s West End, composer Andrew Lloyd Webber abruptly replaced her with Glenn Close for the Broadway run, deeming LuPone’s acting too superficial.

LuPone’s career has since had an unusual renaissance courtesy of the Ravinia Festival, where she has been singing roles of Stephen Sondheim—a composer that she came to late in her career—in various shows there for the past decade. Two of these went on to have Broadway runs: “Sweeney Todd” and later “Gypsy,” which won LuPone her second Tony as Mama Rose, and was briefly reprised in a stellar rendition of “Everything’s Coming Up Roses” at Ravinia’s recent Sondheim gala.

Now preparing to resurrect another role originated by Ethel Merman, LuPone will star as Annie Oakley in “Annie Get Your Gun,” a venture that Ravinia is putting considerable time, money and energy into, perhaps hoping that this, too, will become the basis of another Broadway run, which well it might. Frank Butler was originally going to be played by Brian Stokes Mitchell, but when he dropped out, Patrick Cassidy stepped in. The son of Jack Cassidy and Shirley Jones and brother of former teen idols David and Shaun, Cassidy is a bona fide Broadway performer in his own right.

Ironically, the idea for making a musical out of the life of Annie Oakley came from Rodgers & Hammerstein, who sought to revitalize Broadway after World War II by producing material in addition to their own. Hammerstein had thought of his old partner Jerome Kern as composer—the man who had written “Show Boat” with Hammerstein a generation earlier—but Kern passed away before having a stab at it. Irving Berlin was already a national treasure in a state of semi-retirement by then, but became intrigued by the possibility of trying to write songs specifically for characters. That was something Berlin had never done in his long career, the innovation virtually having been a Rodgers & Hammerstein trademark.

The end result turned out to be one of Berlin’s most enduring scores with such huge hits as “There’s No Business Like Show Business,” “They Say It’s Wonderful,” “Anything You Can Do,” “I Got the Sun in the Morning,” et al. Every song in this show is a gem, and even if it goes to New York, you cannot have a better “pit” band than a full Chicago Symphony Orchestra. Paul Gemignani conducts and Lonny Price will direct. (Dennis Polkow)