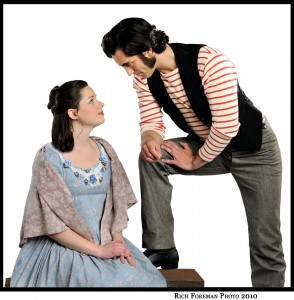 “Carousel” was Richard Rodgers personal favorite of all the musicals he wrote, either with lyricist Lorenz Hart or with Oscar Hammerstein II. Together, Rodgers & Hammerstein created a new kind of musical drama with 1943’s “Oklahoma!” where every song advanced the story line and every dance was done in character. The line between music and drama was so magnificently blurred that you never knew when dialogue might turn into song, or when action would turn into dance. “Carousel” followed two years later, developing even deeper characters and containing more music than “Oklahoma!” The R & H “You’ll Never Walk Alone” ending was certainly more optimistic and uplifting than Ferenc Molnár’s “Liliom,” upon which the show is based (Molnár was said to not only have approved, but to have loved it), but much of the play’s bleakness remained intact. Certainly the central character of Billy Bigelow was as earthy and tough as ever, even if he did have his more gentle moments. Indeed, there has been a trend in recent revivals and productions of “Carousel” to have things be so bleak, so dark, and so non-musical in presentation that you often thought you were watching “Liliom” interrupted by background music. Thankfully, Light Opera Works is reminding us why “Carousel” was chosen by Time magazine as the best musical of the twentieth century: the music.

Director Stacey Flaster, who has served as a guest choreographer for the company for a number of productions but who is making her LOW directorial debut with this production, makes sure that we never forget what a dark story that this is, for sure. She has altered the R & H accidental stabbing of Billy back to Molnár’s original where Billy (Cooper David Grodin) commits suicide, and does so effectively enough that there is an audible audience gasp when he does. And the character of Jigger is here restored to a true, almost overbearing thug, albeit a thug who can sing. (Jeremy Trager virtually eats up the scenery when he is onstage.)

But what really matters is that when Billy and Julie (Natalie Ford) meet and go from cynical speaking to beautiful singing in their “If I Loved You” duet, it works, and it works magnificently, particularly when backed by a lush, full orchestra (conducted by Roger L. Bingaman), a rare and wonderful luxury. Also memorable is the sub-plot romance of Carrie (Elizabeth Lanza) and Mr. Snow, often a throw-away role, but here played by George Keating with the perfect blend of New England indifference and arrogance. And Winifred Faix Brown nearly steals the show with her exuberant leading of the chorus in “June is Bustin’ Out All Over” and her poignant rendition of “You’ll Never Walk Alone.”

Actually, R&H left Billy’s death as an suicide, as it was in the original Molnar script. It was only the film version of ‘Carousel’ that changed it to an accidental stabbing. The libretto for the stage version of the musical states:

BILLY [Stabbing himself in the stomach]: Julie!