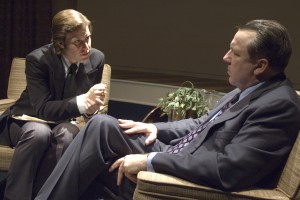 These days he’s called Sir David Frost, which seems a smidge lofty for someone better known three decades earlier as a louche British media personality and man-about-town. There was the bouffy hair, the sly wit. But no one took him seriously. Not really.

Frost had a short-lived talk show that ran in the U.S. from 1969-1972, and when the plug was ultimately pulled, he took it personally—a banishment from the American limelight he was desperate to regain—and it is no wonder he saw his 1977 television interview with Richard Nixon as a way back in. And to some extent it was.

But what American today under the age of forty knows his name—or knows his name for anything other than his Nixon interviews? It’s no slight, I think, to ask the question, and it’s probably fair to say Frost is all too happy to let the Nixon interviews stand as his defining career moment.

The irony of landing such a “rather big fish that swims in not untricky waters” is that it remains Frost’s one real American legacy, a news-making landmark wittily if somewhat obliquely laid out in Peter Morgan’s 2006 play “Frost/Nixon,” which details the machinations and negotiations leading up to the interview, as well as the showdown itself.

The play was a hit both in London and on Broadway, with Michael Sheen as Frost and Frank Langella as Nixon; the same actors showed up in Ron Howard’s 2008 film adaptation, which I liked quite a lot. This is the first time the play has seen a Chicago production (under the sharp, clean direction of Louis Contey for TimeLine), and it is packed with enough sideburns and three-piece corduroy suits to satisfy any seventies nostalgist.

The play’s main shortcoming—and I think this is true of the movie, as well—is that Frost comes across as the more intriguing, and to some extent, integral figure. The man was a piece of work. Nixon was too, but within the play’s framework, Nixon is a snooze. The person who holds your attention is Frost, and yet Morgan’s script reveals very little behind the breezy mask aside from a few brief moments of vulnerability.

Frost is, naturally, the flashier character—a guy who brings a date to his first meeting with Nixon, which says a lot about his personality, but you don’t have much sense what is driving him intellectually. Is he a poseur? A scrappy comer whose British accent makes it seem more palatable? Who knows, but he’s just slippery enough to hold your attention, and Andrew Carter fills the man’s Italian loafers with a real sense of eye-and-ear-catching panache.

So much here is about aping well-known figures without resorting to outright mimicry, and I like what Carter is doing within those limitations. He’s captured Frost’s casual but studied self-confidence (sitting with his elbow draped over the back of his chair during the interview), but when things come to a head in the final confrontation about Watergate, he nails Frosts’ physicality and keyed-in psychological state. I should also mention he wears the hell out of that ridiculous haircut.

Terry Hamilton is also quite good as Nixon, right down to the distinctive vocal cadence, and he conveys, with real complexity, a palpable sense of how this man viewed himself post-resignation. Hamilton and Carter match up quite nicely when it comes down to their always-civil-but-cutthroat strategizing against one another—an exhausting but fascinating game of chess that’s all the more compelling when you see the lead-up.

It’s impossible, really, to watch the play and Hamilton’s incarnation of Nixon without thinking of Rod Blagojevich, hubris be thy name. Both men view television as their salvation—a way to reshape the narrative—and both reveal a fixation on money that is as understandable as it is off-putting, but the play has the good sense of giving Nixon at least the suggestion of self-loathing.

Neither Frost nor Nixon ultimately know where they stand during these interviews, and Keith Pitts’ curved set subtly suggests the Oval Office as if it were sent through a centrifuge, a terrific image that drives home the discombobulation both men feel right up to the very end as they sit contemplating—side-by-side but miles apart. (Nina Metz)