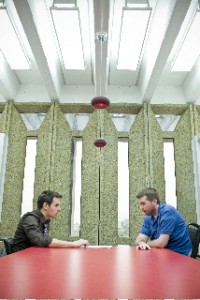 Eighty percent of suicides are men, according to Scott, the president of Legacy Letters, a consulting company devoted to helping would-be suicides craft the perfect note—and Scott is after this demographic ruthlessly, trying to sell them the platinum suicide note package and keep them from changing their minds in the would-be-satire of Suicide, Incorporated. Scott is paranoid that his new writer Jason is a mole from a suicide-prevention agency, but he’s only half-right; Jason has in fact joined the company to save at least one client, stemming from guilt over his own brother’s graphic suicide. Enter Norm, a client whom Jason could save if he doesn’t over-identify with him, and Tommy, Jason’s dead brother, who appears as a series of flashbacks. Andrew Hinderaker’s play is lucidly and often dazzlingly written, with a strong and subtle ear for dialogue between desperate men, but “Suicide Incorporated” floats uneasily in the space between the dark satire of the first half of the play and the meditative but often tired drama of the second, never dwelling comfortably in either. At heart the play is the story of disenfranchised white American men who need each other, and there are some moments of vulnerability between Jason and Norm that are as nuanced and raw as any I’ve seen about lonely men reaching out to one another, but in between, the Mametesque banter at the offices of Legacy Letters doesn’t hold up, and the satire falls apart. What takes its place is just a touch too heavy-handed (there’s a closing monologue about seeing through fog at a diner in the hills so platitudinous that it threatens to undermine a lot of the show’s lyrical power). Ultimately, however, “Suicide Incorporated” is easily worth watching for the ardent, committed acting of the entire cast—though Michael Patrick Thornton as Norm steals the show in his understated despair—along with clean, claustrophobic production values and rapid set changes that help drive home every character’s sense of captivity and helplessness. (Monica Westin)