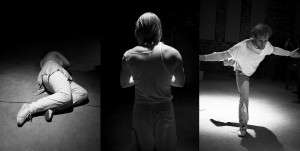 The Anatomy Collective, an experimental performance group, is emerging from the underground to bring its current endeavor, “Unintended Structures,” to Chicago’s first Fringe Festival, which kicks off on September 1 for a five-day run (www.chicagofringe.org).

“We’ve been pretty underground for a long time, performing in warehouses, small galleries, hidden spaces,” Stephanie Acosta, Anatomy Collective’s co-founder says. “We thought, what happens if we bring ourselves up to the surface?” The Fringe Fest “seemed like the right avenue.”

The festival is not a juried event; rather each performer or company is put through a controlled lottery. “It’s sort of a wonderfully democratic way of choosing things,” Acosta says. “Particularly for the first Fringe, I liked the potential for madness.”

The Anatomy Collective’s piece for the festival is one born mostly of scholarly research and experiential explorations. “We would do things like go out and gather as an ensemble in a high-traffic space during rush hour […] spending time being still in a place where you’re rarely still and picking up on the details around us,” Acosta says.

This method also included laying down in high trafficked walking areas or moving against the crowd. They would then take that experience and bring it back to the studio to transform it and recreate the quality, without literally recreating it.

“I think there’s no question that they’ll get an audience,” Acosta says of the Fringe Festival. “What that audience’s response on the side is is what I’m interested in seeing,” Acosta says. (Lindsey Kratochwill)