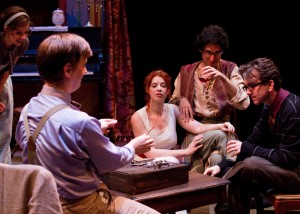 “Frankenstein” was such an extraordinary work for its time—indeed, though a Gothic novel, it is often considered to have virtually created the genre of science fiction—that there has been considerable skepticism over the years about how an unknown, unpublished 19-year-old girl could have come up with such a bizarre, twisted and forward-looking story all on her own.

Mary Shelley herself would stick to the explanation that the tale had come to her in a single nightmare, but the scenario that prompted her to actually take pen to paper can be directly traced to an unusual literary “contest” of sorts that took place on the night of June 16, 1816, where a group of writers and their friends that had gathered at a Swiss villa—including Lord Byron, Percy Bysshe Shelley, Mary Wollstonecraft Godwin (soon after to marry Shelley), Claire Clairmont and Byron’s physician, John William Polidori—were read stories aloud by Byron, after which Byron proposed that each member of the group try to write a ghost story.

The most celebrated contribution and clear winner became “Frankenstein,” but given the immense effect that the story has had on popular culture for nearly two centuries, the specifics of what actually transpired that night to prompt the story has always been a rife subject for speculation. Playwright Emily Dendinger has delved deeply into the events surrounding this evening and culled heavily from letters and diary excerpts of those involved, initially for a master’s degree thesis and subsequently as the inspiration for this play on the subject, receiving its world premiere as the fifth season opener for LiveWire Chicago Theatre.

In this telling, we are shown this group as a collection of bored, spoiled and narcissistic brats who have too much time and money on their hands. That is a nice touch, but there is little credibility to either the dialogue, which is often alarmingly twenty-first century (as are the sets and costumes), or to the performances, which come across as almost sitcom-like, kind of like a “Friends” Halloween special. 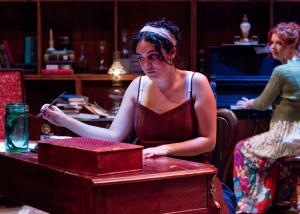 Dendinger has wisely included sections of the original novel and excerpts from other contributions, in part to give a context for how shocking “Frankenstein” was, even to this group, by comparison. But there is also the attempt to minimize the literary imagination of its author by putting in a subplot of Dr. Polidori having studied with an assistant to galvanism pioneer Luigi Galvani, who in the 1790s had shown the animated effects of electrical current on disembodied animal parts. In essence, this play has Polidori perform similar experiments on frogs with the group present, which so intrigues Mary Shelley that she keeps one that was successfully reanimated in a jar on her desk while she writes her tale.

The strained credibility problem, of course, is that if this group had the gruesome reality show of being able to actually watch creatures become reanimated before their own eyes, their thrill quota would be satiated enough to not need the diversion of a scary literary contest, nor would a fictional account of such reanimation be either original nor effective by comparison.

It also seems that director Jessica Hutchinson has missed an opportunity to stage this mock “creation” scene with the sense of mystery and horror that such experiments were able to generate when they actually occurred: newspaper accounts of these were far more dramatic than the static way that the scene is staged here.

Indeed, that is the problem all the way around with “Hideous Progeny.” It asks the question (via Lord Byron) if horror as a genre has exhausted itself, and it has the characters scream arbitrarily at things that we, the audience, are never made to experience along with them. When, for instance, a character sees Byron and Percy standing outside in the rain attempting to scare those inside, we get the annoying scream, but we never get to share the scare: why not allow us, the audience, to see what she sees—even if through her eyes—and feel the fright along with her? (Dennis Polkow)