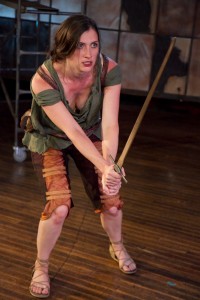 With “The Last Daughter of Oedipus, ” Babes with Blades blithely contradict this well-known undergraduate theater-history fact: violence in Greek tragedy occurs offstage. Functioning as a sort of epilogue to Sophocles’ “Oedipus” trilogy, Jennifer L. Mickelson’s new play finds every excuse it can for sword-swinging and ass-kicking clamor. Ismene, sole survivor of the house of Oedipus, learns in a dream visitation from her dead mother and sister that the tragedies that befell her family were due to an old curse. With her loyal servant Zeva, Ismene sets out to discover the origin of the curse and restore honor to her family name. Any shortcomings in the script might be forgiven, were it not for the failings in the area of the company’s bread and butter—stage combat. Very often, fight scenes that come out of left field lack dramatic tension, and too many sequences resemble battle-royale-style rumbles, the stage packed with players yet with none of them warranting focus. I’ll admit to being taken aback by the play’s harrowing, revelatory final scene, but the path to that point is an often confusing and tedious one. (Neal Ryan Shaw)