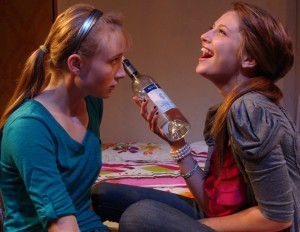 Smart theater companies know they have to carve out a niche, and Profiles, I think, has done a better job than most. The plays of Neil LaBute turn up here often, but even the non-LaBute works (recently Tracy Letts’ “Killer Joe”) have a LaButian undercurrent. They are contemporary stories of middle class malcontents—stories that are harsh but smart all the same, and almost always tied up in a knot over the vexing relationship between the sexes. Really, if delicate lyricism is your bag, you should go somewhere else.

Profiles has earned a rep for staging fully adult work that frequently positions very young women (sometimes teenagers) opposite older men—a dynamic that never fails to trigger all kinds of uncomfortable emotions, which maybe isn’t such a bad thing at the end of the day. Thus, the title alone suggests that Deirdre O’Connor’s “Jailbait” (in its Midwest premiere) is a good fit for Profiles, but it’s also just a good play, period.

Teen sex, douchey nightclubs and fumbling thirtysomething men. That is the play in a nutshell. But O’Connor nails the details and director Joe Jahraus is fully on board with the script’s sharply drawn sensibility.

Getting the tone just right is key, and Jahraus has assembled a canny four-person cast that includes Rae Gray and Zoe Levin as a pair of high school sophomores. We first see them readying to go out. Their plan: Strap on something short and tight, load up on the makeup and sneak into a downtown nightclub.

Emmy (played by Levin, who is 16 in real life) exudes sullen self-assurance, but she is full of shit. She has orchestrated this walk on the wild side for the shyer, quieter Claire (played by Gray, a willowy blonde who is 18). Claire is the type of kid who worries aloud about getting caught and going to jail.

“We’re fifteen—everything fun is illegal,” Emmy sneers. “It gets less scary the more you drink.” Their dialogue has the kind of easy, naturalistic quality that brings to mind snippets you might overhear from teenagers on the El:

“You have a padded bra, right?”

“Oh.” Pause. “Maybe you should stand behind me at the door.” 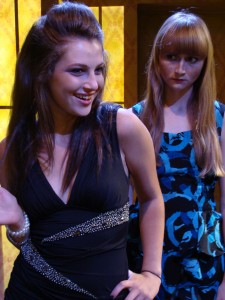 Sneaking out and pretending you’re older than you are—pretending you belong in a “Sex and the City” world where men seem very interested in you—well, that’s pretty intense. Emmy and Claire are way out of their depth, and reality will smack them in the face soon enough.

Claire handles herself like a pro, though, and Gray’s transformation from girl to faux woman is startling—a visual “wow” and a performance full of contradictory emotions bumping up against one another simultaneously: Excited! Freaked out! Unsure! Kinda tipsy!

At the club (sound designer Jeffrey Levin’s throbbing soundtrack is dead-on) they pair off with men at least twice their age played by Eric Burgher (a decent guy getting over a breakup) and a terrifically crass Shane Kenyon (sleazy and blunt about his intentions to get laid: “My first wife hasn’t even been born yet,” he says, flicking away a conversation about monogamy and marriage).

Kenyon’s character is like something out of “American Psycho,” and there is an element of that film’s smirking sense of humor evident here. “Jailbait” is no comedy, but rarely does social commentary come in a package this entertaining. At one point Burgher’s character surveys the club and complains that everyone looks 22. “No,” his pal corrects him, “they’re all dressed like they’re 22.” It’s that kind of place.

To say there is tension up in this joint would be an understatement, but the production finds a smart balance between the first-date sweetness of one couple, and the drunken groping of the other. Each is a version of the nightclub mating dance, where hooking up means not looking too closely.

It will end badly for everyone—although perhaps not too badly. I wasn’t clutching my pearls, but I can still relate in some vague way to that 15-year-old point of view. Every once in a great while I’ll get a whiff of Drakkar Noir—truly, is there anything worse?—and it brings back all those long-forgotten teenage feelings: the thrill of “going out” and testing the waters. Doing things I had no business doing, with guys I had no business knowing. (Nina Metz)