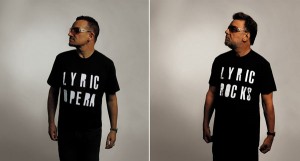 It was ten years ago that then-new Lyric Opera music director Sir Andrew Davis gave Lyric Opera’s first ever free pre-season outdoor concert, at that point in the Petrillo Music Shell in Grant Park. The original idea was to offer a season preview to tantalize the public for the upcoming opera season by presenting highlights performed by the same stars who would actually be in those productions.

Over the years, however, the concept has become a catch-all concert, only a fraction of which has anything to do with what will be presented during the season itself; of this year’s eight operas, only two will be represented at this concert.

Of greatest interest is that all three of the principal stars of the season-opening production of Verdi’s “Macbeth”—which opens October 1—are scheduled to perform major excerpts from that work: Macbeth himself (baritone Thomas Hampson), Lady Macbeth (German soprano Nadja Michael, making her company debut at this concert) and Macduff (tenor Leonardo Capalbo, also making his company debut at this concert, replacing Dimitri Pittas, who is recovering from surgery).

Also curious is that Hampson, who is not scheduled to sing in the company production of Verdi’s “Un ballo in maschera” that opens on November 15, will sing Renato’s “Eri tu che macchiavi quell’anima” at this concert.

Soprano Amber Wagner, the second Elsa in the company’s “Lohengrin” next March, will sing Leonora’s “Pace, pace, mio Dio!” from Verdi’s “La forza del destino” while bass-baritone Kyle Ketelsen, who will sing the role of Escamillo in “Carmen,” will sing Mozart excerpts that include Leporello’s “Catalogue Aria” from “Don Giovanni” and Don Alfonso’s trio with Dorabella (Emily Fons) and Fiordiligi (Amanda Majeski) from “Così fan tutte.” Slovakian bass Štefan Kocán, who will sing the role of Banquo in Verdi’s “Macbeth,” will sing Fiesco’s “Il lacerato spirito” from Verdi’s “Simon Boccanegra” and Osmin’s drunk duet “Vivat Bacchus!” with Pedrillo (René Barbera) from Mozart’s “The Abduction from the Seraglio.”

Puccini will be well-represented with a rarely heard early instrumental work, “Preludio sinfonico,” Op. 1, composed for his final exam at the Milan Conservatory, as well as excerpts from “La rondine” and “La bohème,” including the Act I love duet, which will be performed by Cuban soprano Elaine Alvarez—Micaëla in the October “Carmen” performances—as Mimi and Leonardo Capalbo as Rodolfo. It was Alvarez who stepped in to this same role at the last minute three years ago when the original Mimi of that “bohème,” superstar Romanian soprano Angela Gheorghiu, was fired for missing rehearsals. (Dennis Polkow)