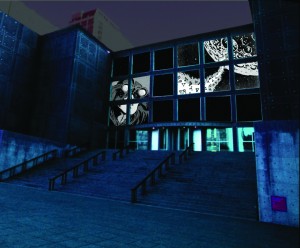 Next week Redmoon Theater will unveil their latest collaboration with MCA Stage, “The Astronaut’s Birthday,” a performance about an astronaut’s journey home to earth that will turn the MCA’s front façade into comic-book- and 1950s-sci-fi-inspired frames that incorporate hand-illustrated shadow puppets, live actors and projections. We spoke with Redmoon Artistic Director Frank Maugeri about retro technology and the challenges of the MCA space.

In this piece you make use of a lot of handmade, almost primitive technology—what will the performance look like?

We use close to 700 hand-drawn hand-inked hand-gelled images that will be projected along the entire façade of the MCA. The piece has remarkable colorful generosity to it, though it’s based on the four-color system of Marvel Comics. We chose this simple palette because the press in 1960s comics, one of our major inspirations, only worked with rudimentary colors, and we also play with what feel like press-making mistakes, with washed-out colors at moments.

There are comic-book-bubble special effects, and there’s a narrative thrust to piece along with great images of rocket ships being blasted into space and turning the façade into a massive black hole.

Then there’s the shadow puppetry, a poetic medium with a movement of its own mind and its own pace. One thing I wanted to break in this particular production is that pace, so I’ve added in moments of live performers who at first appear to be frozen silhouettes but then are revealed to be live performers who run across the screen in a challenge to the medium. 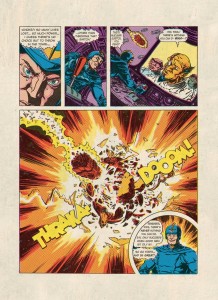 “The Astronaut’s Birthday” seems to draw from various sources and aesthetics. Can you talk about the story?

In some ways it’s a traditional science-fiction comic-book adventure—an original tale that Tria Smith and I and others created around a bunch of thematic ideas that are interesting to us. In short, one day on planet earth a massive orb lands from space on a massive farm in the midwest. The farmer discovers it has a message from a great being: Send one and I shall reveal the truth of the universe and save the world. The world searches furiously for an individual who has a matching orb. When he’s found, they catapult him into space to meet the great being… the astronaut will return and change the world. But once the astronaut’s in space he’s sucked through a wormhole… at its heart the tale is really a piece about the dangers of desire unfettered, dangers of powers, and the kind of singular remarkable power of love. (Monica Westin)