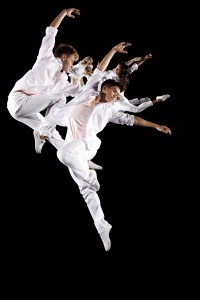 Few choreographers have had as much success drawing crowds as Lar Lubovitch. The Chicago native has spent his forty-plus year career bringing lush, romantic dances to audiences via stage (e.g. his New York-based company, his stagings of Broadway musicals), screen (he choreographed the sexy, urbane duet that proved Neve Campbell’s chops in Robert Altman’s “The Company”) and TV (he recently won an Emmy for a PBS Great Performances presentation of his “Othello). Despite spending the bulk of his professional career in New York, Lubovitch keeps firm ties in Chicago, actively wooing Midwest dance audiences, most notably with the inception of the Chicago Dancing Festival—a weekend of free performances by the most famous modern and ballet companies from across the U.S. Next week, the Lar Lubovitch Dance Company performs two programs featuring works that bookend the choreographer’s career, from his mid-seventies pieces set to Steve Reich and Philip Glass, to his more recent narrative, multimedia works. Mr. Lubovitch spoke with me over the phone about the program and the ongoing influence of his hometown.

The programs at the Harris present very different phases in your career. How would you describe the current trajectory of your work?

My pieces are always about dancing first and foremost. Each different piece of music elicits a different physical response and therefore a different type of dancing. From the time I began forty-three years ago to now, that has not altered. However, over decades different techniques, vocabulary, language, all that accumulates to add hopefully to the depth of what can be expressed about the music.

You’ve choreographed for television, film, even ice dancing. What draws you to work in different media and disciplines?

It’s largely about stretching my own imagination and what can be done with movement…to challenge myself and keep it interesting. As an artist, staying in one place is not that compelling. Most people involved with creating want to keep forward motion.

You’ve seen a great deal of change in the dance world throughout your career. What are your thoughts on the evolution of the dance scene in Chicago?

When I left Chicago, there was zero dance there. You couldn’t be a dancer in Chicago; there was no career available. There were a few places to train if you wanted to, but people left to pursue careers, usually to New York. Now Chicago has a thriving dance community. In a very natural way dance has grown in Chicago and a next major step was called for. The Dancing Festival was an attempt to provide that stepping stone—to advance the audience’s knowledge of dance, to build the audience and to capitulate to the idea that Chicago is becoming and has become a destination for dance.

It’s definitely very compelling to dance in Chicago. I think my work is very firmly rooted in a Chicago aesthetic. Chicago is a great city of architecture. People in Chicago know that they’re in a place where architecture is vital and cutting edge—all that structure and form, learning to see all that form and understanding the forward motion of form and how architecture keeps evolving. And choreography is of course architecture—architecture to music plus poetry. (Sharon Hoyer)