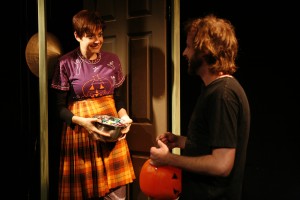 The Halloween custom of trick-or-treating has a lot in common with improvised theater: two parties, essentially strangers, have a brief interaction across a threshold. One party is seeking candy through dressing up in a way that at least theoretically is different from what would be worn the rest of the year; the other party is seeking entertainment or engagement—those who aren’t, leave home on Halloween, or do not bother to answer the door—without so much as stepping outside a domestic sanctuary. It is a win-win situation for people who want a brief, late-fall theatrical experience without stepping into a theater, for the mere cost of imagination for the trick-or-treater and a mere bit of candy for the temporary Halloween “host.”

That theatricality is exploited in Ron Riekki’s new play “All Saints’ Day: aka 44 Poems About Jeffrey Jones,” receiving its world premiere by The Ruckus with the California playwright in attendance at the opening. The first “trick” of the play is the title itself, a homage to, as Riekki puts it in his program notes, “Jeffrey Jones the playwright, not ‘Ferris Bueller’ sex offender,” who is usually listed as Jeffrey M. Jones. Playwright Jones wrote a play called “70 Scenes of Halloween,” the point of departure for Riekki. Reviews of that play—which I have not seen—would suggest it had a darker intention and more narrative flow than this lighter take on the theme which literally is a series of Halloween vignettes one after the other: doorbell rings, “trick or treat?” interaction, doorbell rings again, and so it goes.

The dialogue that ensues between the trick-or-treater—in every vignette Kevin Crispin—and the person answering the door—sometimes male, sometimes female but always played by Elizabeth Bagby—is, of course, the heart of the play. And it is a real tribute to Riekki’s writing and to Crispin and Bagby’s acting that these encounters come across spontaneously and real-life enough that they could pass for genuinely improvised interactions. With one exception, the holiday itself is rarely the theme, but simply a backdrop to show the alienation so many experience in modern society that they would use the arbitrary act of someone ringing their doorbell one night a year as an excuse to reach out. Often the costume itself is the focus of the interaction, such as dressing up like the male sex organ and becoming a true “dickhead,” or a swine, which becomes a diatribe on law enforcement, et al. Immigration, religious fundamentalism, anti-Semitism, even tainting candy are all dealt with, albeit in cursory fashion.

Special mention must be made of Matthew Humphrey who acts as a mime and host for the evening, holding up a sign for each vignette, every time with a new interactive theme and with a playful reckless abandon and remarkable comic physicality that is childlike in the best sense. (Dennis Polkow)