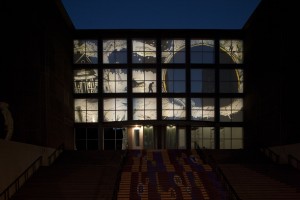 There’s a brilliant sort of “Eureka!” moment revealed early in the staging of “The Astronaut’s Birthday,” Redmoon’s spectacle produced in collaboration with the Museum of Contemporary Art, and that is the realization that the array of symmetrical windows composing the facade of the museum’s Josef Paul Kleihues building make a perfect set of panels for a comic book. Once witnessed, you’ll be unlikely to ever look at the MCA without picturing some graphic narrative unfolding within its panes. Created and directed by Redmoon artistic director Frank Maugeri, with a co-creation credit to the company’s co-founder, Jim Lasko, “The Astronaut’s Birthday” is a compelling story, with nice artwork from Donovan Foote and others that pays homage at times to the likes of Jack Kirby (although it retains a circa-seventies superheroes-generic style most of the time) and that purports to draw from the Golden Age of comics and the 1950s sci-fi movies in telling the tale of an innocent bystander drawn, along with his family, into events of cosmic significance. Comic-book nerds like me are more likely to suss out references to the Silver Age from the sixties and seventies, especially in the plot structure and “lessons” learned by the characters. Nevertheless, the whole thing works pretty well as advertised, with some especially nice visual moments when all the panels are brought together to create a single dramatic image.

Other nice touches include the voice narration by visual artist and Redmoon board member Tony Fitzpatrick, whose own work has lately started exploring the superhero genre, albeit in a much more stylized form. I couldn’t help at times wishing that the visual approach here had been similarly more edgy, in reflection of both the creators, the venue and the evolution of comics illustration since the sixties. And that’s the foundation of my quibble with the show: it starts with a brilliant premise, and doesn’t push enough. After a while, you realize you’re just watching a giant motion comic, when so much more could be happening. The “stage”; i.e. the grand staircase and landing that sits between the audience and the show, goes unused and while much is made out of the low-fi accomplishments of the creative staff, we take them for granted, since it all happens behind the “curtain” and, well, we’re a jaded culture when it comes to spectacle and special effects these days. Much better, I think, to peel away the curtain somehow and let the audience see what’s at stake. Otherwise, the increasingly chilly autumn air (you sit outside, in bleachers in front of the museum) makes clock-watching an inevitable distraction. (Brian Hieggelke)