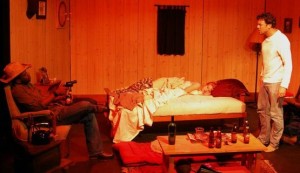 If only closure were as quickly and easily accomplished as it is in this new play by Jake Perry. Taking place over a night and day in a remote cabin in the woods, “Closure” somehow layers easy-breezy dialogue on top of a life-or-death situation resting on the foundation of a life-affirming theme of reconciliation.

Dennis and Catherine have come to Matt’s vacation cabin to confront him with news of Maria’s recent death. All old yet estranged friends, Matt and Catherine were once lovers, as were Dennis and Maria. When Catherine intimates to Matt that she suspects that Dennis killed Maria out of jealousy, the old flame begins to flicker again, and the potential murder mystery gives way to epic wound-licking.

First-play pitfalls aside, such as an actor-writer main character (portrayed well enough by playwright Perry), “Closure”’s emotional maturity can’t be doubted. Yet lengthy backstories and arguments at gunpoint do not a play make. Next to Perry and the charming Austin Talley, Sarah Brook makes no attempts to develop her character beyond two dimensions. The functional set seems lit by floodlight, betraying perhaps an overall lack of nuance. (Neal Ryan Shaw)