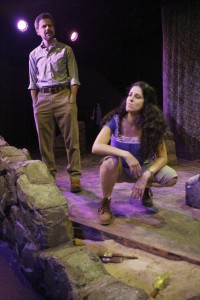 Ollie, the main character of Robert Koon’s new play “Menorca,” begins by telling us that in the world of archeology, time is thought of not as a line, but as a cake, comprised of layers. On an archeological dig on the island of Menorca in Spain, one of Ollie and James’ students discovers the bones of a dead body. Sending the university-funded project into disarray, the discovery reminds Ollie of the time she went on a ride-along with George, a Mexican-American border patrolman, and found a dead body near the California-Mexico border.

Koon uses both events, each recalling the other throughout the play, as fertile ground for the discussion of a myriad of topics, including identity, race, nationality, immigration, place and history. Although Ollie’s interactions with James, George and her students verge on being repetitive and threaten to stall the action, the play never feels didactic. As Basque-born Ollie, Kirsten D’Aurelio is captivating and though it seems to end with little circumstance, “Menorca”’s philosophical rigor is stunning. (Neal Ryan Shaw)