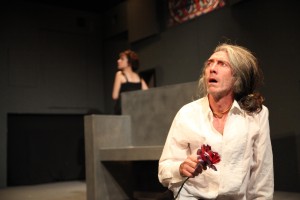 Love and politics never seem to mix well. And so, Dustin Spence’s new play, after nearly a year of in-house development, manages to muddle, not illuminate, the intricate paths human relationships take when love and war get in the way of each other.

Sasha and Nikolai were once passionate young revolutionaries in Russian-occupied Belarus. Now after the fall, Sasha is a violinist living in Prague, married to American architect Zoe, and Nikolai is a bloated, corrupt government minister who takes ruthless pity on Natalia, a strung-out prostitute.

A series of duets, “The Sound of a Yellow Flower” never seems to transcend its playwriting exercise origins. The play progresses as characters trade partners and trade again. Yet the full weight of each interaction fails to add momentum to a narrative lost beneath a complicated yet unclear political situation. The utilitarian set reveals some nice surprises, and the cast deserves credit for hitting the script’s few grace notes. But, to hammer home my music analogy, this is an etude, not a symphony. (Neal Ryan Shaw)