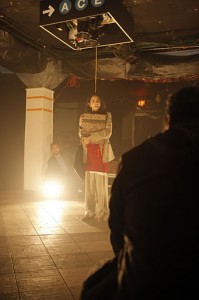 This isn’t just a smart production—it’s a brilliant postmodern adaptation of the “Arabian Nights, ” where Scheherazade’s famous interlocking stories, with the cliffhanger endings that kept King Shahriyar so enraptured in ancient Persia, are interwoven with a contemporary story of an Arab-Jewish interracial relationship against a backdrop of a post-apocalyptic Manhattan saturated with anti-Arab paranoia. It’s almost impossible to overstate the wit, fluidity and complexity with which writer Jason Grote and director Seth Bockley send the commanding, hyper-articulate cast through a labyrinth of character quick-changes, transitions from slapstick comedy to sincere political messages, and appearances from Osama bin Laden performing “Thriller” to Flaubert describing Egyptian courtesans. It’s also an incredibly hip production, with deconstructive metatheater, a strong Hitchcock influence, and striking stage pictures (including a Beckett-esque genie in a shopping cart and the most creative use of a strobe light I’ve seen in theater). But—and this is a big but—it’s hard to find any emotional or even real intellectual payoff from the show’s hard work. It’s often unclear how seriously the production takes itself—occasionally the stylized comedy borders on farce, and actions move far too quickly through moments that could have strong emotional resonance. Ultimately, the connections of various mythos feel like cerebral showmanship, without creating any messages that are truly original, thought-provoking or moving, and when an actor describes “Arabian Nights” as possibly being a “joke mistaken for history,” it’s hard not to see this same trap in “1001.” Finally, for a play as obsessed with cultural stereotypes as this one, there are some uncomfortable racialized signals, from a strong anti-Israeli message to the casting of the one dark-skinned actor to play the most common perpetrator of violence. (Monica Westin)

While we certainly appreciate New City’s support of Collaboraction’s production of 1001, Monica Westin’s review contains an assertion we feel should be addressed. She takes exception “to the casting of the one dark-skinned actor to play the most common perpetrator of violence.” We feel this statement is both inaccurate and incorrectly implies racism in our casting process. Grote’s play is written to be performed by four male actors, with each actor playing a “track” of multiple characters. The track in question, Track F, played by Edgar Sanchez, includes, in addition to the violent Orthodox Jewish Student character (a relatively minor… Read more »

I saw this play and had similar feelings to the reviewer’s. Also, I think the response is very telling. The black actor plays a guy who ruins the main relationship, the guy who is racially violent twice, the guy who bangs out his sister due to uncontrollable black lust, a eunuch, and all of the imagery about blackness. I think that the play covered just about every white fantasy covering black males and their sexual nature (expect for the rape of a white woman, but his sister was a white woman so maybe even that), even keeping the arm at… Read more »

The Count’s comment attempts, anonymously and troll-ishly, to stir up anger where none exists. He seems to have seen “1001,” and to have read the review and comment above his. But he shows no interest in responding to the bulk of play’s writing, design, performance, or direction, or to any part of Westin’s review save the last sentence. That’s telling because ethnic stereotyping of Arab, Persian, and other Middle Eastern populations by Americans (especially white ones) is a continuous focus of the production, as Westin’s piece makes clear. Instead, The Count focuses on a single, racial aspect of the casting.… Read more »