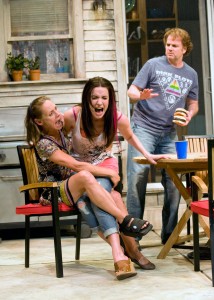 A title can do much to shape the expectations of the audience, or it can do very little. When Jonathan Franzen named his epic new novel “Freedom,” he was advertising his ambition, raising reader expectations before a page was even turned. Likewise, “Detroit” signals big things. Where it might have indicated, a couple of decades ago, a story about the glories of America’s greatest industrial success, automobiles, or perhaps the music of a musical city, Motown, today “Detroit” serves as shorthand for America in decline. A big topic, in other words.

Lisa D’Amour’s new play certainly touches on big ideas, and does so with a deft mastery of character development and comic touches, rather than didacticism. Set in a past-its-prime “first ring” suburb, it’s something of a Truly Desperate Housewives, as Mary (Laurie Metcalf) and Ben (Ian Barford), a seemingly prototypical middle-class couple hanging on in the face of Ben’s layoff from his bank job, open themselves up to the new neighbors next door, the striving-for-a-fresh-start substance-abuse addicts, Sharon (Kate Arrington) and Kenny (Kevin Anderson). D’Amour’s script does a nice job of interlacing a bunch of engaging themes, like the near-extinction of the idea of neighborliness, the persistent stubbornness of the American Dream even in the face of life’s real nightmares and the question of how well we actually know anyone: our friends, our spouses, our selves. In D’Amour’s world, there is no escape from grim reality: not through drugs or alcohol, not through internet fantasies, not through nature and certainly not through decamping to suburbia. Reality is depressing (as it always seems to be in the theater), but there is hope. Hope in this new friendship, hope in tenacious efforts to overcome life’s setbacks. When the neighbors start seeming to be something other than what they’ve offered themselves as, it’s not grounds for a breakup, but just some concern. Because even liars are better company than loneliness.

These are big ideas in the stew, befitting the play’s titular promise. But D’Amour is not ready to nail the coffin shut on her characters, or  on America, by extension. And because she’s ambivalent, her climactic scene, a backyard bacchanal, does not ring true, its excesses out of step with the characters we’ve come to know, unless, of course, they’re all on acid. But I don’t think that’s the idea.

No, the idea seems to be ambivalence at its core. It’s all broke, but as her characters ask, “What are we going to do?”  Funny that, how ambivalence makes for real life but unsatisfying theater. 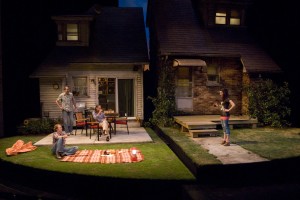 That being said this all-ensemble cast delivers a performance that exemplifies what makes Steppenwolf great. And scenic designer Kevin Depinet does backyards (he also did Goodman’s “The Crowd You’re In With” last year) better than anyone. Austin Pendleton’s brisk direction keeps the comic elements at the forefront, with some curious if not heavy-handed touches, like lights-out scene changes taking place on stage, with actors sometimes interacting with the crew moving props. Vintage ensemble members Laurie Metcalf and Kevin Anderson haven’t been on this stage for some time, but they blend in with the newer ensemble members Kate Arrington and Ian Barford like they’d never left. Metcalf’s Mary is a fragile flower, bleeding inside, a cipher of sorts; Barford’s Ben is a gregarious guy next door. Anderson plays Kenny with masterfully understated nuance; he manages to convey a sense of below-the-surface madness just in the way he cocks his head. And Arrington, who’s had a nice run on the Steppenwolf stage recently, really stands out as the bright-eyed broken spirit Sharon. Sharon’s star may be forever fallen, but Arrington’s burning bright. (Brian Hieggelke)