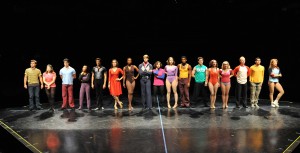 Despite its considerable longevity on the Broadway stage, its endless revivals and the enormous affection that dancers and dancer wannabes continue to have for it, the principal claim to fame of “A Chorus Line” is that it thrived during one of the most musically down times in Broadway history outside of world wars. If you wanted to see a bona fide Broadway musical that wasn’t a revival during the mid-to-late 1970s, “A Chorus Line” was one of your really scarce choices: only “A Little Night Music” and “Annie” would give it any real box-office competition.

Film scorer/arranger Marvin Hamlisch had become a household name by getting more credit for re-arranging Scott Joplin ragtime music than Joplin did in the megahit movie “The Sting” as well as having written one of the most mushy and popular love songs of the seventies with “The Way We Were.” All of this had garnered him no less than three Oscars in a single year and considerably heightened public interest in his score for “A Chorus Line.” Yet even in “A Chorus Line,” the usually derivative Hamlisch could not resist the temptation to cram several elements of the hit song “New York, New York” into the only annoyingly memorable song from the show, “One.” Since this was the 1970s, large-scale musicals were out: “A Chorus Line” has only one production number in the entire show, and no sets whatsoever. Costumes are needed only for the finale, and even then, only eight are needed.

Dance at its most effective is an organic bodily response to music but here, Michael Bennett conceived choreography and then commissioned Hamlisch to write music that could be tacked onto it after the fact. Were the dancers actually responding to music and if the music itself were at the same level of quality as the choreography, “A Chorus Line” would be a far more powerful show.

The principal value of the show is that it can, when it is well-done, give the theater-goer a unique sense of the individual hopes, dreams and failures of those who make up a dance chorus line. Since the characters are all supposed to be dancers, often inordinate attention is paid to the choreography of “A Chorus Line” when in fact, the real challenge of the piece is the acting needed to convincingly portray dancers. 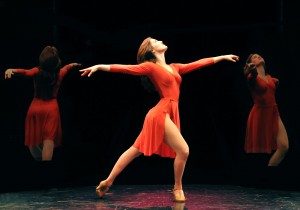 Marriott’s current production attempts to address that dichotomy by having a separate director and choreographer, Mark Lococo and Rachel Rockwell, respectively, rather than the previously announced Rockwell taking on both roles. Aside from the fact that Rockwell has done little more than attempt to adapt Bennett’s original choreography to the in-the-round format with varying degrees of effectiveness, the direction of the show seems to begin and end with the choreography itself rather than the acting, which is stodgy and affected. What good is the dancing if we don’t care about the characters? That, after all, is precisely the point of “A Chorus Line”—that the anonymous and symmetrical dancers you see perfectly lined up on a stage are actually individuals as different as night and day. Acting is what is needed to communicate this, not dancing.

Particularly distracting was the decision to cast Cassie, the supposed broken-down veteran trying to get a job at the end of her career, as a young dancer. The advantage to that is that a younger dancer can theoretically dance the climactic scene more convincingly, but in this case, the dropping down of two-way mirrors for that scene made it seem as if Cassie were dancing inside the cramped confines of a UFC ring. Many roles are similarly miscast, hampering many of the show’s key scenes and credibility, and thus sinking a mediocre play down to a level that, at the very least, is less than mediocre. (Dennis Polkow)