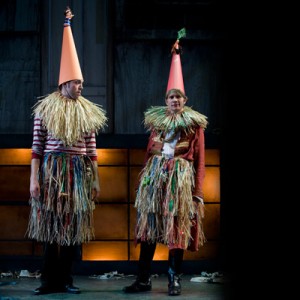 A hot mess. If there’s such a thing as Shakespeare lite, “The Comedy of Errors,” with its slapstick physical comedy and absurd plot involving two sets of long-lost twins, is it. So when Sean Graney adapts it into a ninety-minute production, it’s easy to imagine that he’ll take a lot of creative license—and Graney does, getting rid of vast amounts of the original script and replacing it with lines that could have come from contemporary mainstream Hollywood comedies. Unfortunately, and surprisingly given Graney’s past work, the show appeals to the lowest common denominator (read: jokes and songs about blow jobs). Recognizable cultural touchstones include “Norbit,” where the part of a kitchen wench is played by an actor in a fat suit as a hideous man-eater who demands, among other favors, a colonic from one of the manservant twins whose character channels Will Ferrell’s persona so completely that it’s actually distracting. Cross-dressing and quick-changes (six actors play twenty-three characters), the theatrical elements that helped make Graney’s production of “Irma Vep” at the Court last year so funny, here feel like pointless showing off because there’s so little substance left to the production. If only Graney had stuck to the comedy that’s already in Shakespeare rather than inserting lines like “I’m gonna drink the shit out of this Diet Coke”—there’s a pervasive sense of anxiety at making the comedy accessible that’s totally unnecessary and, frankly, insulting to any audience. (Monica Westin)