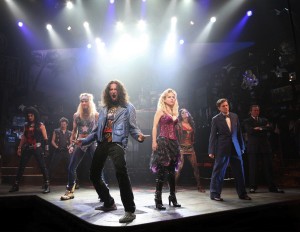 Jon Bon Jovi is the highest-grossing rock tour in America this year so far. Your reaction to this is 1) Bewilderment, 2) Of course! or 3) Who’s Bon Jovi? If you answered #2, You probably already have tickets to “Rock of Ages.”

A very well produced and performed product engineered with precision to target the demographic of folks between the ages of, say, 35 and 50, “Rock of Ages” is a jukebox musical that wears its cynicism as a badge of honor, with a narrator who openly consults “Musicals for Dummies” as an expository device. Though self-deprecating fourth-wall-crashing awareness is certainly not new to the theater, it probably feels fresh to an audience for a show that was likely weighing this versus spending an even greater sum to see Roger Waters solemnly recreate “The Wall” as an act of rock theater at the United Center. And if not, who cares? Sometimes you just want to have some dumb fun, and “Rock of Ages” is absolutely perfect in that regard.

The story, as it’s purportedly made up on the spot, concerns the romance between two young would-be stars trying to make it in LA circa mid-eighties, when hair metal and power ballads were in their heyday (Whitesnake, Quiet Riot, Journey, Foreigner, Poison, anyone?), and the Sunset Strip was its epicenter. (Not to overlook the nascent MTV’s “Headbanger’s Ball” as its Boswell.) A ginned-up no-stakes plot about a German developer’s plan to clean up the Strip adds more excuses for cartoonish characters and campy bits. But everything about this show—everything—exists in service of the music. A contagious mashup of the songs we all disdained at the time (cool kids were into Elvis Costello, The Clash and mope rock, right?), I would be shocked if the creative process wasn’t something like, “We gotta use ‘We’re Not Going to Take It’—let’s create a protest!” Or ” ‘Oh Sherrie’ is the perfect resolution number—let’s call the female lead Sherrie!”

Yes, it’s that transparently calculated. But so too was the scene it chronicles. In fact, the genius of this show is its recognition that rock ‘n’ roll, especially the over-the-top metal bands of the late eighties—with their makeup, their costumes, their antics, their hair!—were theater. And power ballads are not all that different than an Andrew Lloyd Webber number (See “Glee”). Add in the shrewdness of seeing the market potential, that same marketplace that filled Soldier Field two nights in a row this summer for Bon Jovi. Since the rock ‘n’ roll wasn’t really all that authentic in the first place, you can sit a mile away in a crowded stadium to see the “real” thing, or you can sit in the relatively comfortable confines of a downtown theater, and hear a perfectly rendered edition of a song that features better dancing and theatrics than even a rocker in his prime could offer. “Rock of Ages” even sells drinks in the theater to augment the concert experience. The whole thing is a crash course in rock ‘n’ roll anthropology.

Of course, the show has to be tight for this tradeoff to make sense, and tight it is. Constantine Maroulis, apparently of “American Idol” fame, plays the male lead, Drew, with a perfect blend of vulnerability and charisma. His Sherrie, Rebecca Faulkenberry, channels Reese Witherspoon, the perfect “just a small-town girl…” (and yes, of course, Drew was born and raised in South Detroit.) The supporting cast is rendered in perfect two-dimensional charm, from MiG Ayesa as Stacee Jaxx, the embodiment of Axl Rose, to Travis Walker as the oddly misplaced Euro New Waver, Franz. (“I’m not gay, I’m German.” Yes, no groaner goes un-uttered.) It’s all sleazy guys and slutty girls and rock ‘n’ roll cliches of the lowest form. But damn if I’m not still humming the songs three days later. (Brian Hieggelke)