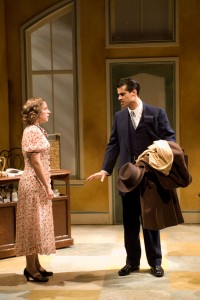 “She Loves Me” is one of those legendary musicals that you always hear about but rarely get to hear. A casualty of an early closing back in 1963 when it first opened on Broadway, it has the distinction of being the first musical ever directed by Hal Prince, contains a sumptuous score by a pre-“Fiddler on the Roof” Jerry Bock, a pre-“Cabaret” book by Joe Masteroff and featured some of Broadway’s greatest stars of the day, including Barbara Cook and Jack Cassidy, who won a Tony for his involvement.

As a follow-up to Writers’ Theatre’s hugely successful “Oh, Coward!” last year, but without key personnel that made that show work so well—namely, director Jim Corti and music director Doug Peck—Writers’ Theatre takes on its first foray into the classic American musical with “She Loves Me,” a work that, because of its intimacy and lack of big production numbers, would seem ideal for the company’s intimate approach.

To say that this production of “She Loves Me”—a charming work when done well—misses the mark is an understatement: it doesn’t even know where the target is. Typically, one either casts actors who can sing a little or singers who can act a little, and then work to bring everyone up to speed from where they are but here, the worst of all worlds is achieved by primarily casting singers but then not supplying either enough stage direction for true characterizations to emerge, nor enough musical direction to have them sound at their best. The result is a production where everyone—even obviously talented veteran performers—appear to be just going through the motions in a caricature-like manner, almost performing in italics, as it were.

The romantic leads haven’t so much as a spark between them, making it a tedious experience to endure their stilted scenes together. Ideally, being co-workers who cannot get along on the job but who unknowingly write secret love letters to each other should achieve enough sexual tension with their bickering that we want them to get together in the end. Not only does that never happen here, but even when they do actually fall in love—at least in the script—we feel nothing. Even the subplot of the store owner being so jealous of the male clerk who is as close to him as a son that he attempts suicide when he fires said clerk for falsely accusing him of having an affair with his wife, achieves no momentum whatsoever. This is a major misstep from a company that usually puts on some of the best productions anywhere in the area but that in this incarnation could more aptly be re-titled, “She Bores Me.” (Dennis Polkow)