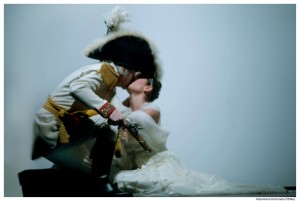 The MCA’s new Global Stage series, part of a remarkably strong lineup of performance at the museum’s theater this year, begins with Vienna-and-Paris-based company Superamas’ show “EMPIRE (Art & Politics),” a postmodern performance using theater, dance and recorded film that combines a re-enactment of a Napoleonic battle, a film-release party in New York and a fictional documentary about Afghanistan. We spoke with founding company member Philippe Riera about metatheater, hybrid performance and history.

Do you think that hybrid theater offers more room for creating messages about the current state of the world? Do we need to be making theater now that is somehow about the digitization and viral spread of meaning in the world now?

The good thing about a stage performance is that you really play with the authentic real people here on stage, before your eyes, and the fake—the action is more a representation of things in a given context. In the case of “EMPIRE,” some spectators really believed we went to Afghanistan to interview Samira Makhmalbaf… So we decided to change the editing of the documentary film to make sure people wouldn’t think we are duplicating capitalistic strategies usually used to abuse people’s naivete. A hybrid art form forces the viewers to wonder about what they see… and what it may mean… This is something we do to activate the spectators’ gaze. It is for us a real strategy to resist against myths and legends, no matter how beautiful they may be…. A strategy of joyful deconstruction.

This seems like a simplistic question, but why Napoleon? How does the political history you reference relate to the Afghanistan documentary? Can you trace any connections that you see between these two moments in military and world history?

What do we know about this war in Afghanistan? Only what certain authorized embedded medias and journalists report…. but often, as JL Godard put it, the other one—the enemy—is missing in all those representations of war….Napoleon used to send back to Paris some Bulletins Militaires which informed the entire nation about his gorgeous victories, even before the battle had taken place!! Communication does not create reality but definitely history.